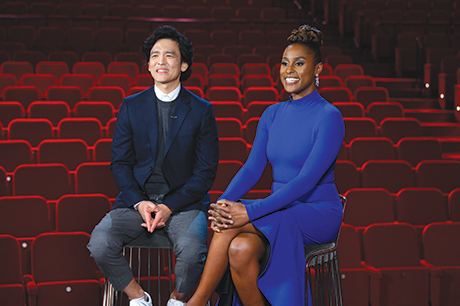 The Academy of Motion Pictures Arts and Sciences announced the nominees for the 2020 Academy Awards, and “Joker” led all films with 11 nominations, followed by “1917,” “The Irishman” and “Once Upon a Time … in Hollywood” with 10 nominations each.

Actor and producer John Cho and producer, actress and writer Issa Rae announced the 92nd Oscars nominations on Jan. 13, in the David Geffen Theater at the Academy Museum of Motion Pictures, which is scheduled to open later this year.

Nominees for Actress in a Leading Role are Cynthia Erivo for “Harriet,” Scarlett Johansson for “Marriage Story,” Saoirse Ronan for “Little Women,” Charlize Theron for “Bombshell” and Renée Zellweger for “Judy.”

Nominees for Actor in a Leading Role are Antonio Banderas for “Pain and Glory,” Leonardo DiCaprio for “Once upon a Time … in Hollywood,” Adam Driver for “Marriage Story,” Joaquin Phoenix for “Joker” and Jonathan Pryce for “The Two Popes.”

Nominees for Actress in a Supporting Role are Kathy Bates for “Richard Jewell,” Laura Dern for “Marriage Story,” Johansson for “Jojo Rabbit,” Florence Pugh for “Little Women” and Margot Robbie for “Bombshell.”

Nominees for Actor in a Supporting Role are Tom Hanks for “A Beautiful Day in the Neighborhood,” Anthony Hopkins for “The Two Popes,” Al Pacino for “The Irishman,” Joe Pesci for “The Irishman” and Brad Pitt for “Once upon a Time … in Hollywood.”

Nominees for Directing are Martin Scorsese for “The Irishman,” Todd Phillips for “Joker,” Sam Mendes for “1917,” Quentin Tarantino for “Once upon a Time … in Hollywood” and Bong Joon Ho for “Parasite.”

Academy members from each of the 17 branches vote to determine the nominees in their respective categories. In the Animated Feature Film and International Feature Film categories, nominees are selected by a vote of multibranch screening committees. All voting members are eligible to select the Best Picture nominees.

Active members of the Academy are eligible to vote for the winners in all 24 categories beginning through Tuesday, Feb. 4.

The 92nd Oscars will be held on Sunday, Feb. 9, at the Dolby Theatre at Hollywood & Highland Center, and will be televised live on ABC.