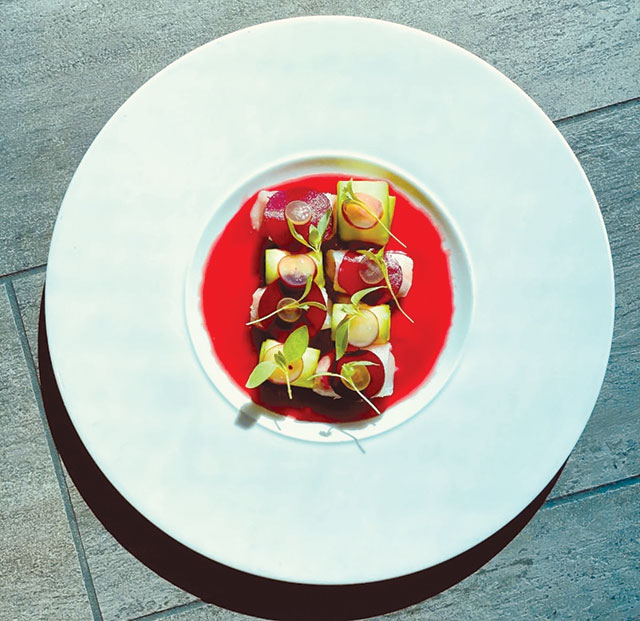 The hamachi is one of the stunning first course dishes offered on 71Above’s lunch menu. (photo courtesy of 71Above)

71Above, located on the 71st floor of the US Bank Tower, offers panoramic views of downtown Los Angeles and beyond. The OUE Skyspace, a 45-foot slide cantilevering outside of the high-rise building, while separate from 71Above, provides a thrilling start to an evening out.

Executive chef Javier Lopez prepares an elevated seasonal menu and adds a personal flair to many of his dishes.

The restaurant is built around a unique 360-degree compass next to the floor-to-ceiling windows, which change in opacity as the sun moves across the sky, with an individual compass at each table.

Sitting at a table overlooking Malibu to Palos Verdes, the uninterrupted panorama of greater Los Angeles is breathtaking during the day and very romantic in the evening.

Guests can choose from three different dining experiences: a reservation deposit for a prime window table, an edge table right at the window or one of the two chef’s tables that offer a direct view into the kitchen.

Both the lunch and dinner menus are prix-fixe, with a two-course lunch menu for $35. Guests can also select an optional wine pairing for an additional $24 during lunch.

Our server went over the menu and shared the staff favorite: a creamy and rich black squid ink pasta layered with shredded crab and slightly spicy Calabrian chili peppers.

First course items on the menu include a parsnip soup with pickled apple mostarda made from mustard seeds, shaved walnuts and pretty nasturtium flowers. Other selections include a burrata with sliced persimmon, and fried Brussels sprouts glazed with a Mandarin green apple curry sauce. We chose a yellow tail hamachi, a market salad and a roasted beet salad as our starters.

Artistically arranged with two rows of Japanese yellow tail, half of the hamachi was wrapped with thinly sliced cucumber and topped with sliced grapes, while the other half was topped with red beet medallions and sprigs of micro-greens.

Roasted beets were placed on a bed of ancient farro with a sprinkling of buckwheat grains on the top. This dish was dressed lightly and the texture of the grains balanced the smoothness of the beets.

For the second course, we selected the New Zealand salmon filet. Cooked in a miso brown butter with coconut, the filet was served with three types of squash including a maple glazed squash and a puree.

Two large pan-seared diver scallops were served on a bed of farro risotto. Crunchy julienne leeks and a creamy leek foam dazzled the top of this dish. The third entrée was the staff’s favorite squid ink pasta.

We finished with a bowl of coconut custard hidden under a bright green basil gelée. Dollops of Key lime curd, a scoop of strawberry sorbet, freshly cut strawberries and crunchy, flavorful sesame brittle decorated the top. The complexity and textures of this dessert offered an array of bright and clean flavors.

The second dessert was a round, crisp ginger snap tuile wafer on top of dark chocolate cremeux, smoked banana ice cream and a salted peanut crumble. Both desserts were pleasing in presentation and flavor.

Pastry chef Vanesa Beltran oversees the program and will introduce a wide range of new artistic desserts including vegan and gluten-free sweets for the lunch and dinner menus.

Spur-of-the-moment guests can come in for dinner and sit in the bar or lounge without a deposit reservation. On a first-come, first-served basis, diners can order from the a la carte Bar Bites menu prepared by the same fine dining kitchen.

Items on the menu include oysters, a potato and two-cheese fritter with truffles, a falafel with za’atar and pickled onion, and dates wrapped in bacon and blue cheese. Shareable plates include roasted beets, charcuterie with selected cured meats and marinated olives, and a chef’s selection cheese plate. Heartier fare includes steak tartare, octopus and Nduja Bolognese pasta.

71Above will be offering a special four-course Valentine’s Day dinner menu on Feb. 14 for $150 per person. Lead sommelier Catherine Morel will introduce some of her favorite wines with a supplemental $75 wine pairing.

Reservations for lunch during the week are recommended, but not required for the main dining room starting at 11:30 a.m. The restaurant is open nightly for dinner starting at 5 p.m. Reservations can be made on the restaurant’s website, and payment in full gives you a “ticket” with the number of guests and time of the reservation. Pricing varies and depends on the menu. $$$ 633 W. 5th St., (213)712-2683.