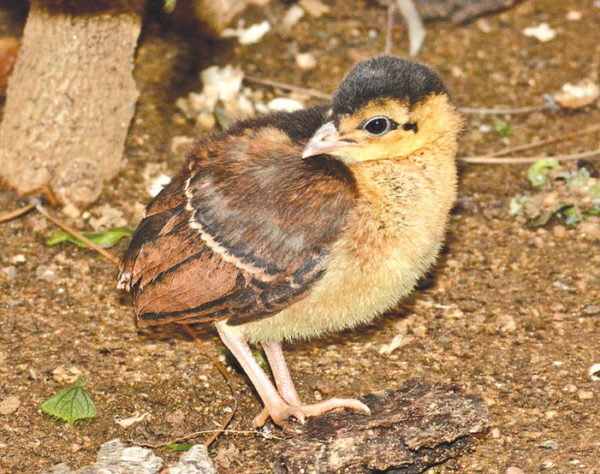 The Los Angeles Zoo recently welcomed its first Congo peafowl chick, a pheasant native to the Democratic Republic of the Congo.

While most people are familiar with the Indian peafowl, commonly known as peacocks, many might not know there are other species known as Congo and green peafowl. The chick was hatched to a breeding pair of peafowl, becoming the zoo’s first successful hatch since 1997. The birth is also the result of an Association of Zoos and Aquariums’ Species Survival Plan program to help build a sustainable population for the dwindling species.

“This is a great example of one of the L.A. Zoo’s many successful conservation efforts,” said Mike Maxcy, curator of birds at the Los Angeles Zoo. “The number of Congo peafowl found in the wild is currently shrinking and it is crucial now more than ever to have sustainable populations in North American zoos to help protect this bird from possible extinction.”

The current North American sustainable population consists of only 26 Congo peafowl in 10 AZA-accredited institutions, which includes their breeding pair and its newly hatched chick at the L.A. Zoo. Since not much is known about the shy, secretive type of bird, animal care staff are still adjusting to the breeding habits of the pair.

In the wild, Congo peafowl breed in their native spring season, which happens to be winter in Los Angeles. To meet this challenge, L.A. Zoo animal care staff constantly monitor the outside temperature and make adjustments to keep the birds comfortable. To respect the sensitivity of the birds, the chick will be bonding with its parents out of public sight in the Zoo’s Avian Conservation Center, a facility that aids in captive breeding for rare and endangered birds.

The Congo peafowl is currently listed as vulnerable by the International Union for Conservation of Nature. Their population is threatened by human activities such as mining, logging, agriculture and hunting.

Because the birds reside in dense forests, an accurate population census is difficult. Estimates range from 2,000 to 9,000 Congo peafowl remaining in the wild. Male (peacock) and female (peahen) Congo peafowl are approximately the size of a domestic chicken, but are colored differently. Unlike the better-known Indian peacock, the Congo peacock’s tail is short and lacks ocelli (eyespots).