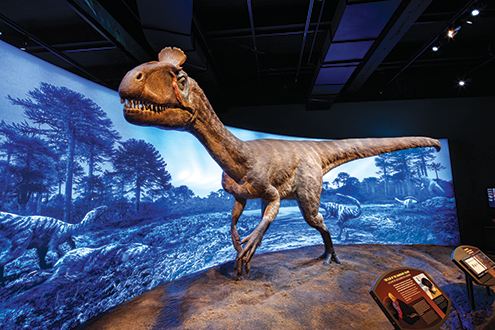 The predator Cryolophosaurus, “cold crested lizard,” is one of four species of dinosaurs featured in “Antarctic Dinosaurs.” (photo courtesy of the Natural History Museum of Los Angeles County)

The Natural History Museum and the La Brea Tar Pits have opened new attractions for the holiday season.

At NHM, attractions include “Antarctic Dinosaurs,” “Natural History of Horror,” “Frozen in Time: Images of Antarctica” and “Becoming Los Angeles.”

Open through Jan. 5, “Antarctic Dinosaurs” puts visitors in the shoes of Antarctic adventurer-scientists as they go on an expedition to Antarctica’s Mount Kirkpatrick and discover a new species of dinosaur. Immersive environments transport visitors millions of years into the past to Antarctica’s  prehistoric environment where crocodile-sized amphibians and elephant-sized dinosaurs once roamed.

“Natural History of Horror” explores the science behind the scary of classic monster films “Dracula,” “Frankenstein,” “The Mummy” and more. Visitors can learn about scientific discoveries from early experiments in animal electricity to the excavation of King Tut’s tomb that inspired some of cinema’s most iconic monsters. Visitors can also view rare movie props, film footage and hands-on interactives in the attraction.

Showcasing large-scale photographs, “Frozen in Time: Images of Antarctica” displays artist Diane Tuft’s work from her 2012 trip to Antarctica. Through Jan. 20, visitors can see how her photos capture Antarctica’s landscape in abstracted ways.

“Becoming Los Angeles” is a permanent exhibition that tells the story of how Los Angeles transformed into a sprawling metropolis. See the newest addition to the exhibition and learn how Hollywood was born.

Tickets are required for “Antarctic Dinosaurs,” while all other attractions and exhibits are free with museum admission. In addition to the museum’s exhibits, screenings of “Titanosaur 3D” and “Oceans 3D: Our Blue Planet” play daily in the new NHM 3D Theater.

“Titanosaur 3D” transports viewers to the end of the dinosaur age to see how the long-necked Titanosaurs moved, ate and interacted in their Cretacious environment. Run time is 20 minutes.

Winter attractions at the La Brea Tar Pits include “Mammoths and Mastodons,” “Ice Age Encounters” and “Titans of the Ice Age 3D.”

On view now, “Mammoths and Mastodons” includes life-sized models, hands-on interactives and the latest discoveries and research relating to these Ice Age animals.

“Ice Age Encounters” is a multimedia performance that digs into the mysteries of some of the extinct creatures who roamed Ice Age Los Angeles. This dynamic, 15-minute show – open on Fridays, Saturdays and Sundays – features a life-size adult saber-toothed cat puppet, a live performance and film projections.

Daily screenings of “Titans of the Ice Age 3D” give viewers an encounter with saber-toothed cats, dire wolves and more. Attendees can see how these magnificent creatures became trapped in tar, preserved in time and are being unearthed today. All 3D films are free for members.

“Mammoths and Mastodons” is free with museum admission, while “Ice Age Encounters” and “Titans of the Ice Age 3D” require tickets.