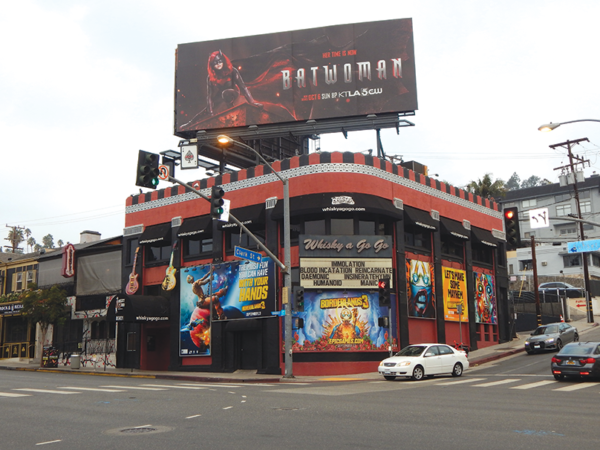 Many artists and bands who have performed at the Whisky a Go Go in West Hollywood have been inducted into the Rock and Roll Hall of Fame. (photo by Cameron Kiszla)

On Dec. 16, Whisky a Go Go on the Sunset Strip was officially designated a local cultural resource in West Hollywood. The City Council unanimously gave the final approval for the building as part of its consent calendar.

The Whisky, located at 8901 Sunset Blvd., was built in 1923 in the Art Deco style, but the building is best known as a popular music venue in the 1960s, 1970s and early 1980s. Many popular rock ‘n’ roll bands performed on the Whisky’s stage, including some that would later be inducted into the Rock and Roll Hall of Fame. Acts like Van Halen, the Police, the Ramones and the Kinks performed at the Whisky, and the Doors served as the venue’s house band.

In West Hollywood, the Whisky was proposed for landmark status alongside fellow Sunset Strip institutions the Roxy Theatre and Rainbow Bar and Grill, though it was delayed by the West Hollywood Historic Preservation Commission. On Oct. 2, the commission was unable to come up with a quorum to consider the Whisky and advance it alongside its counterparts. However, on Oct. 28, the Whisky was approved by the commission, and the Whisky now joins the Rainbow and the Roxy as landmarks after they received their final approval from the City Council in November.

On Oct. 28, the Historic Preservation Commissioners were effusive in their praise for the Whisky and the impact it had on the city.

“If the Whisky is not a landmark for this town, we don’t have landmarks,” Commissioner Edward Levin said.