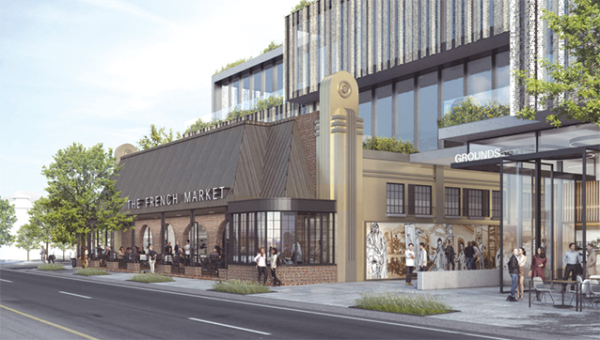 The French Market project is expected to include a 24-hour diner, retail space and subterranean parking. (rendering courtesy of the city of West Hollywood)

In a unanimous vote on Dec. 5, the West Hollywood Planning Commission gave final approval to the French Market project.

The 69,000-square-foot commercial project is expected to include a 24-hour diner, as well as creative office space, outdoor dining, retail space, a showroom, bar and 146 subterranean parking spaces. A new three-story structure will adjoin much of the exterior of the French Market building at 7985 Santa Monica Blvd. in a way that is “sensitive” to the French Market building, said Jennifer Alkire, current and historic preservation planning manager for West Hollywood.

“The materials are subtle and effective, using an alternating pattern of glass and perforated metal screening in rectangular forms to break down the massing of the nearly 50-foot-tall building,” Alkire said.

The French Market was a notable gathering place for members of the LGBT community in the 1970s and 1980s. Though the interior of the French Market building, its roof and north wall will not be preserved, the remaining structure will serve as a prominent reminder of the impact the French Market has had on the city, said Jake Stevens, Faring’s director of community engagement.

“People will know that this building is the French Market forever, not just for the giant letters announcing it on Santa Monica Boulevard, but because the project design features will include documentation, plaques and on-site tributes that will ensure continuing education for all visitors. This clearly passes the drive-by test. You’re going to know this is the French Market for generations to come,” Stevens said.

The project was originally intended to be four stories tall, but after receiving input from the community, developer Faring reduced the project to three stories. The West Hollywood Historic Preservation Commission reapproved the project last month, and due to the lowered height, only the approval of the Planning Commission, not the City Council, was needed.

West Hollywood resident George Credle said he was in favor of the project before the changes were announced, but he is now even more in support.

“I think overall, this project is an improvement over a project which was already good, and it’s amazing that the community was listened to, to the extent that it was. Faring really should receive credit for this,” Credle said.

In fact, all 12 members of the public who spoke were in support of the project.

“I don’t think we had a single dissenting comment, rare for these kinds of hearings, I might add,” Commissioner Stacey Jones said.

The commissioners, while appreciative of Faring’s efforts and in support of the project as a whole, also voiced concerns. Potential issues included the proposed outdoor patio area, which some commissioners thought could negatively impact neighbors late at night; the renovation effort, which some commissioners suggested might encounter trouble saving the landmark; and the potential for the planned green roof to not be installed.

To remedy those issues, the commissioners voted to allow the patio to remain open until 1:30 a.m., with reviews planned for two, six and 12 months after opening, and they confirmed that their approval required the French Market building to be preserved as planned. In the event of potential damage to the French Market structure, there will be “immediate remedies concocted,” Commissioner John Altschul said. They also stipulated that the green roof be constructed as Faring proposed, and the project was approved without objection.

“We’re proud to deliver a neighborhood treasure back to the city of West Hollywood,” Stevens said.

Program allows the public to give foster homes to pets