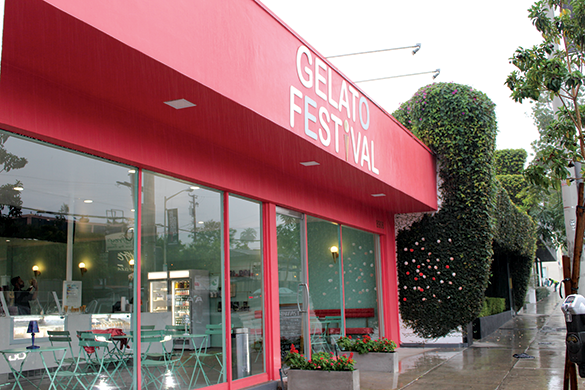 In an effort to boost sales at smaller retail stores during the holidays, “Small Business Saturday” was created in 2010 and is held the weekend after Thanksgiving.

Businesses and city staff in West Hollywood and Beverly Hills are preparing for the “Shop Small” movement to hit their areas.

In West Hollywood, small businesses are participating in the weekend’s events and donating  a portion of retail sales to the Los Angeles LGBT Center’s Culinary Arts Program, according to West Hollywood Chamber of Commerce President and CEO Genevieve Morrill.

“It’s been very exciting because we’re a business organization, so it ties in with helping people further [their] careers and it helps our businesses make a difference,” Morrill said.

Two of the participating small businesses – Gelato Festival and Ysabel – are part of the culinary arts program, which trains homeless youth and seniors and places them with restaurants, bakeries, coffee shops and more.

Burch will be visiting Gelato Festival, an artisanal gelateria with rotating flavors, at noon on Saturday. Created in Florence in 2010 as an international culinary competition between gelato chefs, Gelato Festival has been held in the U.S. since 2017.

“In the process of organizing our two-day festival in Los Angeles this year, we fell literally in love with West Hollywood and the community there,” founder Gabriele Poli said, which led them to open their experiential store on Melrose Avenue.

Poli and his partners will be participating in Small Business Saturday for the first time since their opening nearly three months ago.

“I think that this event will help with building the brand and customers,” Poli said. “It’s continuing the experience of the festival around the world.”

Gelato Festival is just one of 37 small businesses in West Hollywood registered for the city’s “Shop Small Saturday” events.

“[Small businesses] are an integral part in empowering our economy and community to thrive,” Johnson said.

For every dollar spent at a small business in the U.S., approximately 67 cents stays in the local community, as reported in American Express’ 2018 Small Business Economic Impact Study.

For a list of participating small businesses in West Hollywood, visit wehochamber.com/shopsmall.