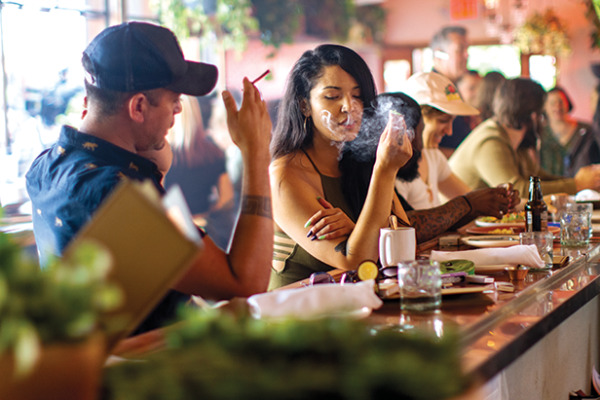 On Dec. 2, the West Hollywood City Council approved a pair of changes to the city’s rules regarding cannabis lounges.

Though all five council members supported the time extension, the measure that approved both changes passed 4-1. Councilwoman Lauren Meister was the lone vote against the motion, as she was in support of a different method of measuring how much cannabis and cannabis products patrons could take home from consumption lounges.

City staff, which discussed the changes with the West Hollywood Chamber of Commerce’s Cannabis Committee, proposed gram-based limits of cannabis and cannabis products that could be taken home. Under staff’s method, patrons could leave with the remnants of up to 100 milligrams of THC/CBD for edible or ingestion products, 3.5 grams of marijuana flower and pre-roll products, and 0.5 grams of THC/CBD for concentrate and vaping products. The limits applied to the purchased amount, not the amount that was left after on-site consumption, said John Leonard, West Hollywood’s community and legislative affairs manager.

At the request of several cannabis business owners and operators who spoke during public comment, however, the council opted for a SKU-based system. SKU, or stockkeeping unit, is how businesses track inventory. Under the rules voted on by the council, patrons are limited in the number of cannabis products they can take home, not by the amount of cannabis or the amount of active ingredient in their cannabis products.

In an interview after the meeting, Meister said she preferred staff’s recommendation, which she said “made sense to me.”

“I also felt that if we were going to do something different, we should have taken a little more time to understand the pros and cons of both. We really only heard the pro. Most of the people who got up and spoke were from the consumption lounges,” Meister said.

Councilman John Duran said he voted to approve the motion so that the cannabis business owners and operators could review the proposed changes before the ordinance receives a second reading on Dec. 16. He also discouraged too much regulation of the cannabis lounges before they have a chance to open. The only lounge to begin operating thus far is Original Cannabis Café, which opened as Lowell Café in September on La Brea Avenue.

“Rather than regulate on leftovers and take-home, we should instead figure out ways to support their opening so that they get off the ground, they get open. Then, if we need to rein it in, we rein back, but let’s at least get the licensees we approved open and running,” Duran said.