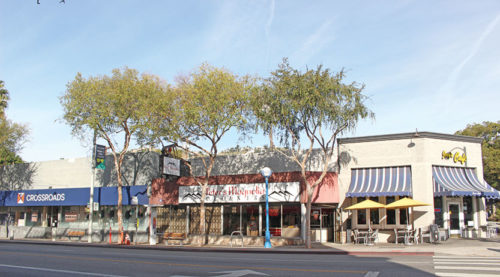 At its Dec. 16 meeting, the West Hollywood City Council approved the city’s $11.4 million purchase of a building at 8301-8315 Santa Monica Blvd., located across the street from City Hall.

Councilman John Duran said that the city makes purchases along its “commercial corridor” – Melrose Avenue and Santa Monica and Sunset boulevards – so that it can control rent on the acquired properties.

“One of the biggest challenges for our community, because we’re such a desirable place to be, is that the cost of housing and commercial rents in the city continue to escalate,” Duran said.

He added that by buying properties and setting rent prices, West Hollywood nonprofits are able to have permanent locations within the city and residents do not have to travel elsewhere to receive social services. The city used the same approach when relocating the West Hollywood Recovery Center to Robertson Boulevard.

According to a staff report, the city determined 8301-8315 Santa Monica Blvd was for sale in April and contacted the owner’s representative for more information. The price and terms of payment were negotiated with the property owner, Broudy Axelrood LLC, at a City Council closed session on Nov. 4.

As part of the purchase, the city will have the property inspected, complete basic environmental testing, request an American Land Title Association survey and review the disclosure from the owner of any property defects, according to the staff report.

A preliminary environmental investigation found that existing soils on the property are contaminated with dry cleaning solvent perchloroethylene. It also concluded that the solvent’s levels can be lowered to a manageable level. Any future projects will be responsible for remedying the contamination.

“The existing commercial tenants on the property will remain for the foreseeable future, and any changes in use to the property are too speculative to analyze at this time,” the staff report reads.

The next steps for city staff will include conducting a study of best uses and feasibility for redevelopment, as well as gathering public input.

“Ideally, as we move forward with these properties, we’re able to meet community priorities and goals,” Duran said.