Authorities in West Hollywood are seeking help in locating a suspect or suspects who vandalized 10 vehicles overnight between Dec. 14 and 15.

The vehicles were parked on Norwich and Westbourne drives, as well as Rosewood Avenue, in a neighborhood south of Melrose Avenue between San Vicente and La Cienega boulevards. The owners found spray-painted graffiti on the vehicles on the morning of Dec. 15. The graffiti included numbers and obscene images. Police are investigating the crimes as vandalism.

“We understand that there are 10 cars involved that were [parked] very close,” said Lt. Bill Moulder, with the West Hollywood Sheriff’s Station. “We have seen some numbers like ‘666’ and some drawings. Thus far, we haven’t seen anything homophobic or anti-Semitic.”

Moulder said patrols have been increased in the area and detectives are searching for clues. As of Tuesday, four or five people had reported the vandalism, and anyone who was a victim is encouraged to come forward and file a report. 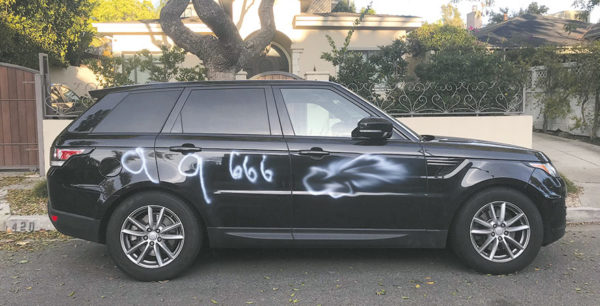 Graffiti was scrawled on 10 vehicles in West Hollywood overnight between Dec. 14 and 15. (photo courtesy of WHWRA)

“We are still in the beginning stage to determine the extent,” he added. “As far as we know, they went down the street and they all occurred within the same time frame.”

Moulder said authorities became aware of vandalism through reports from the West Hollywood West Residents Association, which sent emails warning about the crimes. He added that investigators are hopeful someone will come forward with footage from a home security system that may have captured images of the crimes.

Authorities met with West Hollywood West Residents Association President Leslie Karliss on Monday to discuss the incidents. She said people in the neighborhood are concerned about the situation.

“I am happy they are increasing patrols, and I am hoping residents will check their cameras for any information and forward it to the sheriff’s department,” Karliss said. “It’s very disturbing and senseless. I am so sorry for the people who are affected.”

Anyone with information is urged to call the West Hollywood Sheriff’s Station at (310)855-8850.