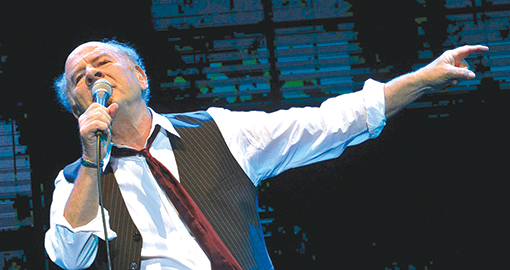 Art Garfunkel will perform in an intimate and personal concert at the Wallis Annenberg Center for the Performing Arts in Beverly Hills. (photo courtesy of Art Garfunkel)

The Wallis Annenberg Center for the Performing Arts in Beverly Hills has announced that an upcoming concert with legendary pop icon Art Garfunkel on Sunday, Jan. 12, is sold out, but a waiting list is available.

Garfunkel will appear at The Wallis as part of his intimate and personal world tour titled “In Close Up,” that features him performing Simon & Garfunkel songs, solo hits and covers, as well as reading excerpts from his book, “What Is It All But Luminous.” The performance will be held in The Wallis’ Bram Goldsmith Theater.

“Art Garfunkel is a true music legend,” said The Wallis’ Artistic Director Paul Crewes. “With a career that spans over half a century, he continues to touch audiences everywhere with his exceptional voice and undeniable artistic charisma. It is an honor to present him at The Wallis.”

Garfunkel began his career in 1956, working solo until 1963 when he met Paul Simon and formed Simon & Garfunkel. The duo went on to a legendary career in pop music but split in 1970 due to creative differences. The pair reunited a few times over the years and received numerous awards.

Simon & Garfunkel won five Grammy awards together, two in 1968 (Record of the Year and Best Contemporary Pop Performance for a Duo or Group for “Mrs. Robinson”), and three in 1970 (Record of the Year, Album of the Year and Best Arrangement Accompanying Vocalists for “Bridge Over Troubled Water”). The duo received a Grammy Lifetime Achievement Award in 2003. Tickets start at $39. The Wallis is located at 9390 N. Santa Monica Blvd. For information, call (310)746-4000, or visit thewallis.org/garfunkel.