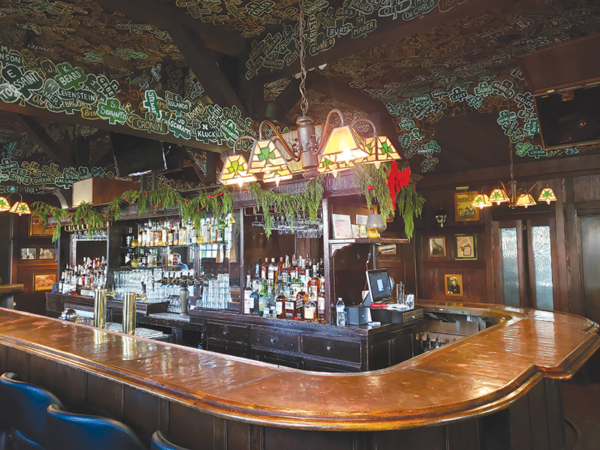 The walls and ceilings of Tom Bergin’s are covered with shamrocks denoting the Irish pub’s regular customers. (photo by Cameron Kiszla)

Brothers David and Francis Castagnetti, the operators of the newly reopened Bergin’s, said their soft opening began with friends and family on Dec. 12 and 13, and the general public was welcomed on Saturday, Dec. 14.

“It was busy all night long,” David Castagnetti said.

The Castagnettis, who previously ran Firefly in Studio City and Union in Pasadena, said they were “honored” to be picked to reopen the famed eatery, which has been a popular watering hole since it opened in 1936. Bergin’s moved to the Fairfax location in 1949, where it was frequented by notable figures like actor Cary Grant and President Ronald Reagan.

The Castagnettis said they have great respect for the history of Bergin’s, and when they moved to Los Angeles in the early 2000s, both brothers’ homes were nearby, as was that of their mother, who lived in Park La Brea.

“This was our hood for a long, long time,” Francis Castagnetti said.

The Castagnettis came aboard to operate the pub in late August, and the only changes they’ve made were to rehang some of the artwork that had been taken down and to clean up the space.

“We left the bones exactly the same … For us, there’s no ego involved in this. Look at all these shamrocks. This was someone’s neighborhood spot for almost 100 years. We didn’t want to take that away from anyone,” Francis Castagnetti said.

The operators, however, do not own the bar, and they declined to name the new owner of Bergin’s. Former Bergin’s owner Derek Schreck said he sold the business to a company called 840 Fairfax LLC at the end of June. According to the Los Angeles County Assessor’s records, the property was sold on June 26 for $4.6 million.

The Castagnettis said Schreck has been very supportive of the business’s reopening.

“Derek has been unbelievably supportive and helpful … he’s been great to us,” Francis Castagnetti said.

Schreck added that he’s rooting for the new operators’ success.

“I’m delighted that Bergin’s is reopening. I never wanted Bergin’s to go away. It just was not a tenable business when I had it, and these guys are really good operators. Hopefully, with renewed community support and their own insight into how they feel Bergin’s can move forward, they’ll be successful. I’m really excited for them,” Schreck said. 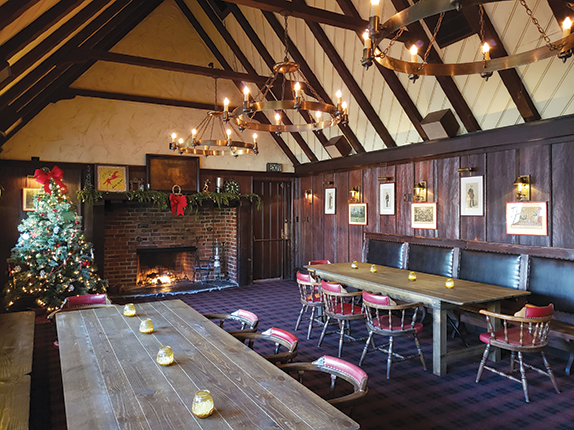 The Castagnetti brothers have left much of the Tom Bergin’s interior as it was when the Irish pub closed nearly two years ago. (photo by Cameron Kiszla)

The Castagnettis said the neighborhood has also been very supportive, and Ken Hixon, senior vice president of Miracle Mile Residential Association, said the new team at Bergin’s has “enormous goodwill” behind them for their attempt to resurrect a beloved community establishment after the building was declared a historic-cultural monument by the Los Angeles City Council in June.

“We’re absolutely delighted. This was the whole point of working so hard to achieve landmark status for the property,” Hixon said.

However, Hixon noted concern about the results of what he described as “a Solomon decision” in June: the Bergin’s parking lot was excluded from historic-cultural monument protections so that housing might one day be built on it.

In plans filed with the city earlier this month, applicant Chris Clifford proposed a 209-apartment project called 800 South Fairfax to replace both of the two-story apartment buildings that are immediately north of Bergin’s. Clifford’s listed representative, attorney Todd Nelson of Armbruster Goldsmith & Delvac, did not respond to requests for comment.

“It’s wildly out of scale for anything on Fairfax. It’s over the top in any sense of the word,” Hixon said.

The two existing buildings contain 40 units, documents filed with the city show, and Hixon said it’s important that the residents of those apartments, which are rent-stabilized, be protected.

Of the 209 units planned for the new development, Clifford’s plans show that 28 will be set aside for extremely low-income tenants.

“We’re working with the tenants of those buildings to do everything we can to make sure they know their rights and they have all the information they need,” Hixon said.

The Castagnettis said they have no association with any planned developments nearby and were reticent to comment on any potential development in the area.

However, David Castagnetti noted that Bergin’s is “a neighborhood bar at its heart.”

“So if the neighborhood grows, and there’s more of an audience for it to be a neighborhood bar … that’s a great thing,” David Castagnetti said.

In the short term, the Castagnettis said they are working to get the restaurant back on its feet. They’ve hired a team of 10 to 15 people who can help the cultural institution thrive.

“A place like this … at the end of the day, it kind of belongs to the city,” David Castagnetti said.