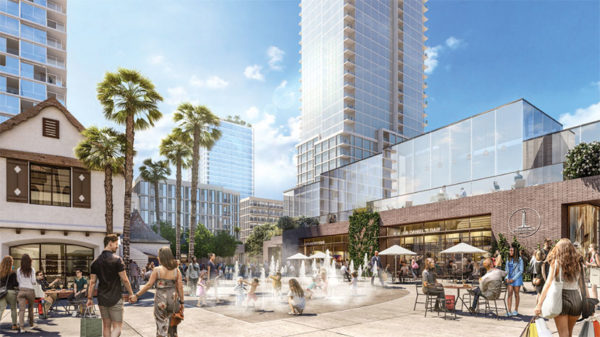 The Crossroads project was approved by the Los Angeles City Council in January. (rendering courtesy of Harridge Development Group)

On Dec. 13, the Los Angeles Tenants Union Hollywood Local chapter and several tenants evicted or being pressured to move out hosted a press conference to announce the filing of a lawsuit against the developers behind the Crossroads project in Hollywood.

The lawsuit, which will be filed in Superior Court of the State of California, County of Los Angeles – Central District, is targeted against the two limited liability corporations involved in the Harridge Development Group’s planned $1 billion luxury development project.

The legal action claims negligence and violations of city code relating to the 1978 Los Angeles Rent Stabilization Ordinance and the Business and Professions Code.

Harridge has failed to create a plan for the tenants to utilize their right of return as was mandated under a condition of approval for the project, said Susan Hunter, caseworker for the LATU Hollywood Local.

In a statement, Hunter also accused Harridge of running “roughshod over tenants in these rent-stabilized units with high pressure – and illegal – ‘cash for keys’ buyout offers, extreme lowball Ellis Act relocation fees and coercive pressure on tenants to waive their ‘right to return’ at their same rents to the new affordable apartments set aside in the new Crossroad development. And while many of the tenants caved to pressure and vacated their apartments, approximately 50 tenants remain. This lawsuit seeks to preserve their rights under Los Angeles’s Rent Stabilization Ordinance and restore rights that we assert were illegally wrestled away from those tenants already forced or pressured out of their homes.”

“If Harridge had done the right thing by these tenants, if they wanted to be a partner to this community, they would’ve come up with a plan for right of return and there wouldn’t have been this press conference,” Hunter added in a later interview by phone.

LATU’s lawsuit demands a jury trial, a declaration that the defendants’ conduct violates the law, and actual, punitive and exemplary damages, statutory penalties and lawyers’ fees.

County to use predictive model on homelessness