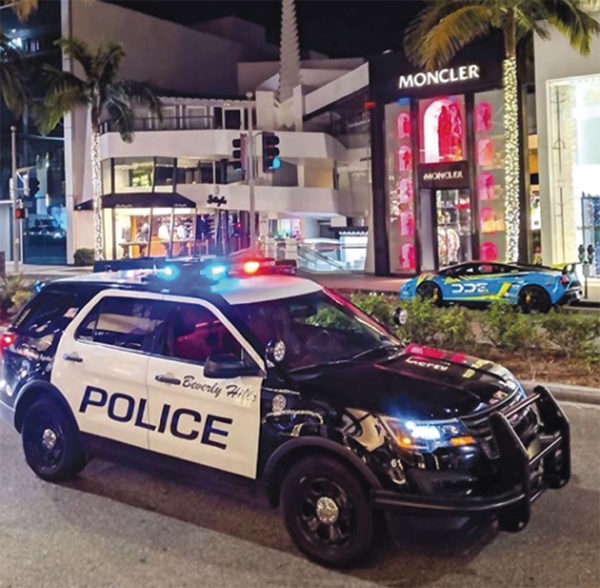 The cameras, known as ALPRs, are installed on street poles, other fixed locations around the city and in police vehicles. They scan license plates to determine if vehicles are wanted in a crime or investigation.

The system searches a database used by law enforcement agencies throughout the country with information about vehicles allegedly associated with a crime. Officers receive information about wanted vehicles on computers and hand-held devices, then search for the vehicles if their whereabouts are unknown. In most cases, the fact that a vehicle is wanted gives officers probable cause to conduct a traffic stop, which often results in arrests when suspects are identified, BHPD Assistant Chief Marc Coopwood said.

“We’ve had situations where there has been a robbery or a stolen vehicle comes in from Los Angeles or somewhere else, and because we share the same database, it identifies that the vehicle has entered the city. In some cases, the case is solved within 20 minutes to two hours,” Coopwood said. “That technological presence is a force multiplier. We are using a lot of analytical software to not only predict crime, but to deploy resources and identify crime trends.”

Coopwood declined to divulge where the cameras are located so as to not alert alleged criminals, but said many are around the perimeter of the city and in the Rodeo Drive, La Cienega and Robertson business districts. They are undistinguishable from other common types of surveillance cameras, Coopwood added.

The police department has 30 ALPRs, with 20 in police vehicles. Six more may be added at fixed locations in the future per the city’s strategic plan. The cameras cost approximately $15,000 each.

The system is credited with decreasing crime in Beverly Hills since they were first implemented in 2008. Crime has reduced even more significantly this year. From January to the end of October, residential burglaries are down 50%, overall property crime has been reduced by 14%, commercial burglaries have been reduced by 14% and violent crimes are down 8%. Statistics show that arrests have increased in Beverly Hills by 8% over the past 12 months. The reductions are also the result of proactive police work, high-visibility patrols and a community partnership with residents and property owners, according to BHPD Chief Sandra Spagnoli.

“The effort from our residents to keep Beverly Hills safe is shown in these numbers, as well as the decrease in crime we’ve seen this last year,” Spagnoli said. “These community partnerships in preventing crimes and suspect apprehension is, in part, why Beverly Hills continues to be one of the safest cities to live, work and play.”

Coopwood said the department is also taking steps to protect the community during the holidays, when crime tends to increase. He cautioned people never to leave valuables in plain sight inside vehicles, which is a common cause of vehicle burglaries, and added that there will be more high-visibility patrols during the holidays.

“About the middle of November, we started deploying more foot beats and bicycle patrol officers, not only in the business districts but in residential neighborhoods,” Coopwood said. “We are looking at crime and predicting where it might occur. The plan is to stay proactive.”