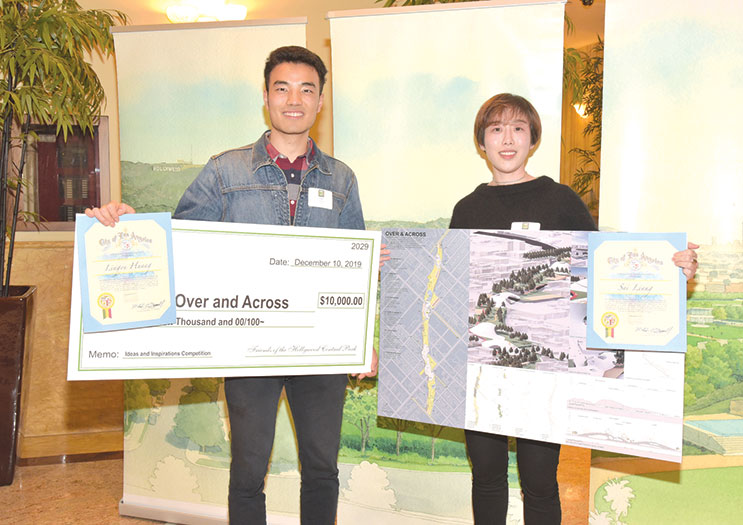 A new generation of student architects was invited to submit ideas about Hollywood Central Park, an open space proposed to be built over the Hollywood (101) Freeway.

The results, which were unveiled on Dec. 10, will help guide the 38-acre park project above a one-mile-long stretch of the freeway between Bronson Avenue and Santa Monica Boulevard. Earlier this fall, Friends of Hollywood Central Park issued a call to architecture schools in Southern California to participate in a student design competition for the park. Students were asked to address three aspects of the master plan framework: connectivity, placemaking and programming, and technology.

“We reached out to tomorrow’s design leaders to take part in a competition to challenge the notion of what a park is today, rethink urban infrastructure and conceive of new applications for technology in the interest of a bold and sustainable future,” said Paul Danna, of Skidmore, Owings and Merrill, master planner for Hollywood Central Park.  “The quantity and quality of the submissions we received were both extremely impressive.”

“This proved to be a staggeringly challenging decision,” added A.P. Diaz, executive officer and chief of staff for the Los Angeles Department of Recreation and Parks, who served as jury chair. “Based on the quality of the submissions we received, the future of architecture appears to be in very capable hands.”

USC students Sai Liang and Lingyu Huang won first place for the entry “Over and Across,” which includes a series of hills and tunnels throughout the park. The first-place entry envisions potential attractions such as a museum, gallery, lecture hall, amphitheater and observation deck. The proposal also includes a green belt extending north and south within the park and laterally into the surrounding neighborhoods. A small lake, sports facilities, picnic area, paths, bike lanes and space for a restaurant and store are also included. The winning design recommends solar paneling to generate electricity in the park.

The students earned recognition for their work and had the opportunity to talk with public officials, city planners, architects, engineers and community stakeholders. The team that created the first-place entry received $10,000.

“It was gratifying to see so many students use their imagination and think creatively about what their open space in Hollywood will look like,” said Los Angeles City Councilman Mitch O’Farrell, 13th District.

Brian Lewis, of Marathon Communications, which represents Friends of Hollywood Central Park, said a draft environmental impact report is being conducted and it will likely be available for public review in three to four months. Ideas from the winning students will potentially be incorporated into the final design.

For information about the proposed park and to view the student’s proposed designs, visit hollywoodcentralpark.org.