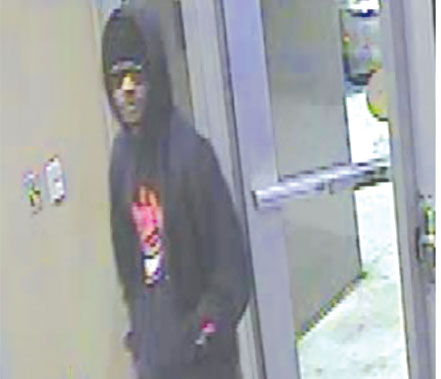 A security camera photograph of the bank robbery suspect has been released by authorities. (photo courtesy of the LAPD)

Police in Los Angeles and West Hollywood have joined the FBI in searching for a serial bank robber dubbed the 20K Bandit by authorities.

“Finding him is a priority,” Jaramillo added. “We have gotten the information out to all the officers and have put his photo out. Hopefully someone will recognize him.”

FBI spokeswoman Laura Eimiller said the suspect was named the 20K Bandit because he has asked tellers for $20,000. In each robbery, the suspect has entered the bank branches, approached tellers and demanded cash. He has eluded to having a gun but none has been seen, Jaramillo added. The suspect fled on foot from each location with an undisclosed amount of cash. No injuries have been reported.

“We are working on it but have not identified a vehicle,” Jaramillo said. “We are coordinating with [West Hollywood Sheriff’s Department investigators] and the FBI to find this guy.”

The suspect is black, 25-35 years old, approximately 6 feet tall and 170 to 200 pounds. He has worn dark clothing and sunglasses during the robberies.

What to watch when you want to feel down

Defendant arrested for graffiti scrawled on cars, at schools