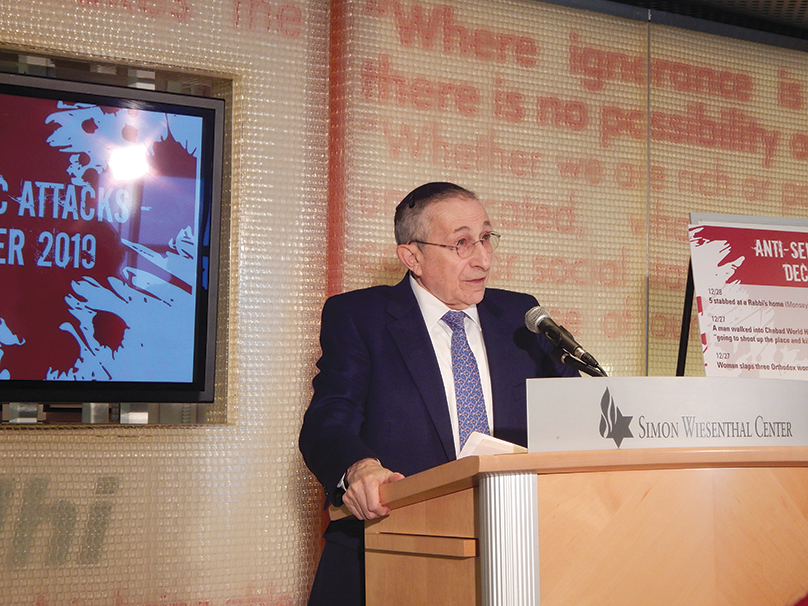 In a press conference at the Museum of Tolerance on Dec. 30, Rabbi Marvin Hier, founder, CEO and president of the Simon Wiesenthal Center, which operates the museum, decried a recent rise of anti-Semitism in the United States and Europe.

In the United States, Hier said, there were more than 10 anti-Semitic attacks in December alone.

Locally, the most prominent incident was the vandalism at the Nessah Synagogue in Beverly Hills, where on Dec. 14, religious relics, furniture and worship materials were knocked over and damaged. The Beverly Hills Police Department arrested Anton Nathaniel Redding on Dec. 18 in connection with the vandalism.

Other incidents have been more violent, such as the recent stabbing of five people in Monsey, New York, at the home of a rabbi on Dec. 28, the seventh night of Hanukkah.

“[The] horrific attack at a rabbi’s home in Monsey, New York, was the latest in a string of anti-Semitic attacks in New York and New Jersey that should shake all of us to our core,” U.S. Sen. Dianne Feinstein (D-Calif.) said in a statement. “No one in this country should be fearful of practicing their religion, yet that’s exactly what we’re witnessing … We must stem the tide of these hate crimes. Freedom of religion is a foundation of our way of life, and more must be done to ensure that freedom is available to everyone.”

“Sadly, anti-Semitism has touched [my district] too, and it’s disturbing to see acts of viciousness harm Jewish communities around the country. We must fight for justice for victims and against hatred,” Lieu said.

U.S. Rep. Adam Schiff (D-Burbank) said on Twitter that his “thoughts are with the community and those who were injured.”

“I am deeply disturbed by the steep rise in anti-Semitic violence … There is no place for this hate in our society,” Schiff said.

He wants to stop the recent rise of anti-Semitic attacks before they worsen. In Nazi Germany, the climax of hate was the Holocaust, the systematic killing of Jews and other people, but the hatred began years earlier with isolated acts of violence and hate, which then grew into national policy. Hier said he sees parallels between the time just before the rise of the Nazis and the situation in the United States today.

“Some people said, ‘these are small incidents … a few people that don’t speak for the whole country.’ It all starts that way. But if you don’t nip it in the bud, it can happen anywhere again,” Hier said. 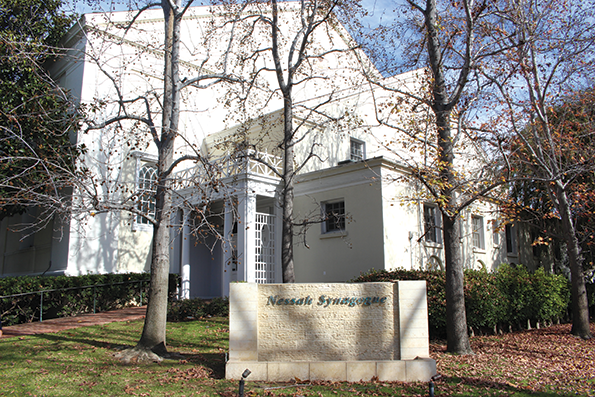 The Dec. 14 vandalism at Nessah Synagogue in Beverly Hills is believed to be one of more than 10 attacks on Jews in the U.S. last month. (photo by Morgan Keith)

To stem the tide of hate, Hier called on President Donald Trump to fund a task force within the Federal Bureau of Investigation to “24/7 concentrate on anti-Semitism in the United States.” Hier, who gave an invocation at Trump’s inauguration, said he will write a letter or otherwise attempt to speak with Trump about the task force, as he thinks the budget for such a task force will have to come from the White House.

“We will try to approach and also reach out to members of Congress to support this. This is a bipartisan issue. This is not a Republican issue or a Democratic issue,” Hier said.

Hier said political leaders on both sides will have to stand up to anti-Semitism in their own parties, and he highlighted examples of the dangers of hate on both sides of the aisle.

“White supremacists are the same as the extremists on the left. They’re both the enemies of the United States of America,” Hier said.

Hier said politicians on both sides of the aisle need to soften their rhetoric, and everyday Americans need to educate themselves and others about the dangers of hate. Otherwise, history could tragically repeat itself.