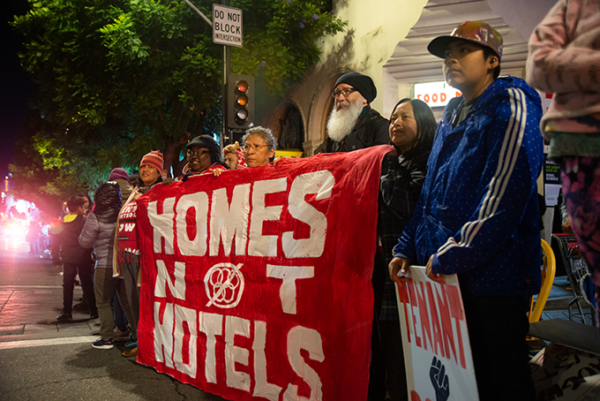 Protestors gathered at the Hollywood Christmas Parade to decry what they see as overdevelopment. (photo courtesy of Brandon Hauer)

Protesters gathered in Hollywood on Dec. 1 to kick off “Days of Rage 2019,” a nine-day string of events calling for a moratorium on evictions in the city of Los Angeles.

Organized by the Los Angeles Tenants Union at the intersection of Hollywood Boulevard and Whitley Avenue, the group launched the union’s annual event by protesting Ellis Act evictions served to tenants at 1719-1731 Whitley Ave. by owner Fari Moshfegh. The Los Angeles City Planning Department has approved a hotel at the site.

Union member Colin Beckett said they chose to start the week’s events at the annual Hollywood Christmas Parade because of its proximity to Whitley Avenue and the visibility it would provide.

“We thought that the Christmas parade would be a great place to connect with other working people in Hollywood,” Beckett said.

René Silva, who is one of the remaining tenants at the Whitley Avenue building and attended the protest, said he learned of official plans to build a hotel when the workers brought equipment onto the property.

According to Silva, Moshfegh originally told tenants that inspectors working on the property were surveying the land to check for fault lines and made no mention of plans for a hotel.

“[Moshfegh] has been bullying the tenants for years. He had been getting away with the bullying and refusal to do repairs until the tenants learned their rights,” said Susan Hunter, a caseworker for the union.

Appeals were filed by Hunter and Casey Maddren of United Neighborhood for Los Angeles to overturn the Planning Department’s approval of the hotel, as well as the project’s exemption from an impact review under the California Environmental Quality Act.

The Planning Department allowed the hotel project to bypass the environmental review despite the large structural change because hotels are included as one of many potential uses for the plot, according to Craig Bullock, planning director for Councilman Mitch O’Farrell, 13th District.

Because of the appeals, the determination was forwarded to the Central Area Planning Commission, who voted 3-0 to uphold the decision and the project’s exemption from CEQA.

The Los Angeles City Council will have final say on the appeal, but likely won’t vote on it before the end of the year, Bullock said.

Beckett maintains that the systems within the city’s departments prioritize speedy development processes over ensuring that tenants have fair access to housing.

The “Days of Rage 2019” events are each organized by a different local chapter, according to Beckett, to demonstrate their growth and reach across the city.

The Los Angeles Tenants Union will continue to hold protests for “Days of Rage 2019” across the city into next week, with events in North Hollywood on Friday, Dec. 6; northeast Los Angeles on Saturday, Dec. 7; and Echo Park on Monday, Dec. 9.

It is a great things your L.A. Tenants Union members have accomplished BUT NOT ENOUGH because of the position taken by Mayor Eric Garcetti and City Council Members on the ISSUE OF HOUSING for Los Angeles. Since housing is being driven by developers to acquire land which means old apartment building will be torn down to build high rise buildings with high priced rentals, Mayor Garcetti and City Council Members will NOT CHANGE their goals to REBUILD L.A. to their needs NOT LOW INCOME RENTES!!!

The L.A. Tenants Union members have build a members strong organization BUT it is my understanding the MEMBERS DO NOT BELIEVE IN VOTING. The best weapon to use against the Mayor & City Council Members is THE VOTE!!!

L.A. Tenants Union members MUST ORGANIZE their L.A. TENANTS UNION VOTES to use in the fight i.e. Herb Wesson running for L.A. Board of Supervisor to REPLACE Mark Ridley-Thomas and because Herb Wesson has been BAD FOR L.A. HOUSING RENTAL MEMBERS!!! L.A. Voters must break the hold that L.A.’s “POLITICAL MACHINE” has on L.A. housing issues or L.A. rental issues will NOT be changed!!! In fact the “RECALL for MAYOR” should have worked but did not have the right people in charge, just wait next time will work WE HAVE THE VOTES but must organize against the Mayor & City Council Member and use the VOTES!!!

Important to promote “VOTER REGISTRATION” by calling office: 1 (800) 815-2666 for 50 FREE forms sent to home or office to sign up NEW Voters!!! Target MEXICAN/LATINOS to sign up since they are NOW the LARGEST RACIAL ETHNIC GROUP in the City of L.A. SHARE information with your special “LATINO EMAIL NETWORK” list of Latino family members, friends & neighbors to promote Latino Community Voting projects!

ALL VOTES will be important for MARCH 2020 ELECTION! Volunteers are going to HOUSE to HOUSE asking for COMPLETED VOTING BALLOTS, do NOT give any one your “Voting ballot” to be USED for by Volunteer for their candidate. Safe guard your VOTE, drop it in a U.S. mail box. SHARE information with other L.A. Tenants Union members!