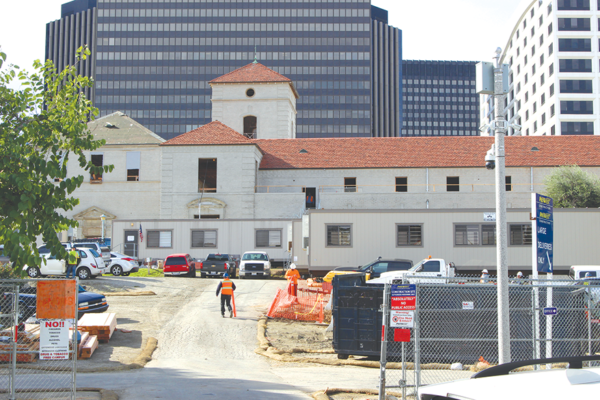 Construction crews began the seismic retrofitting on the campus’ 1929 buildings, which will make the school more earthquake resistant. The structures have been designated B1-B4 and are in different phases of construction. Student instruction is occurring in other buildings.

To achieve this, crews are replacing the four buildings’ clay roof tiles with replicas made by the company who manufactured the originals, Ludowici.

ProWest owner Jeffrey Rising pointed out original Norman trusses in B1 in what will serve as a media room, as well as orange steel reinforcements, put in after the 1933 Long Beach earthquake.

“This is probably the best way to see, in one room, the impact of the seismic upgrade in a glance,” Rising said.

He said the crew put “porcupine beams” around the existing structure that act as a structural steel diaphragm and allow the existing structure to be maintained as an open space. The room will have several large-screen TVs and breakout study rooms, with data and power running underneath the carpet so that the room can be easily reconfigured.

Additionally, B1 will house a reading lab and a college and career center.

Seismic retrofitting measurements in the neighboring B2 include structural steel beams, fiberglass-reinforced polymer systems and repair patches. Pylman also said that a completely new building foundation was installed over 14 months in B2, which is used for administration, attendance, counseling and classrooms.

The classrooms, occupying the second level of B2, will have folding partition doors, allowing them to be opened for group sessions for a “modern, 21st-century learning environment,” Pylman said.

On the exterior, crews prioritized installing gutters to channel rainwater and are restoring bricks. Strip lighting will eventually be mounted in the concrete and flower beds of the Graduation Lawn to light the entire line of buildings.

Structures B3 and B4 house the school’s arts programs – band, theater and choir – and include later additions built of clay brick, rather than cement blocks like the rest of the facilities.

B3 houses the KL Peters Auditorium, which has been stripped to the studs after internal demolition cleaned out lead and asbestos and the balcony is being restored. Pylman was not certain how or if the seismic retrofitting renovations would affect the amount of seating in the auditorium or B4’s Salter Theater.

“This is probably one of the most unique projects that we’ve all been involved in,” Pylman said.

Next steps will include pulling up the concrete and wooden floors in B3 and B4 to allow for excavation below the foundations, where they will increase the mass and anchor the buildings. The excavation site will then be refilled and concrete slabs will be poured, Pylman said.

After all seismic retrofitting is completed, crews will start building from the ground up. Renovations for B1 and B2 are projected to be completed in winter 2021, and no completion date has been announced for B3 and B4.