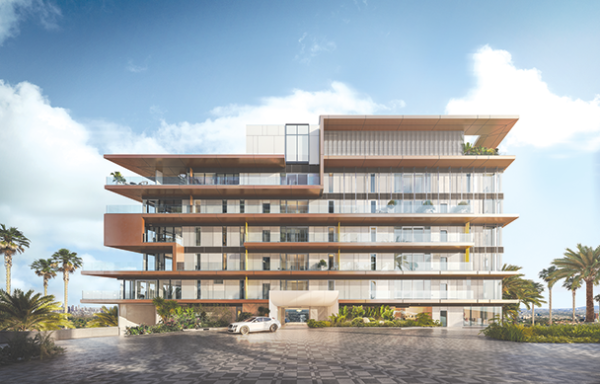 The Pendry Hotel and Residences are slated to open next year on the Sunset Strip. (photo courtesy of Pendry Residences West Hollywood)

Located at the former site of the House of Blues in West Hollywood, the Pendry Hotels and Residences are under construction and are expected to open in 2020.

The property is located at the southeast corner of Sunset Boulevard and Olive Drive and is being developed by AECOM and Los Angeles real estate agency Combined Properties. Nearly a decade ago, the West Hollywood City Council voted 4-1 to approve the mixed-use development, with then-Councilwoman and current Mayor Pro-Tempore Lindsey Horvath as the lone vote against the project.

“While I believe the project is beautifully designed and will be enjoyed by future visitors of West Hollywood, I voted no on the Pendry development because I did not support the demolition of the House of Blues or 25 rent-stabilized units of housing,” Horvath said in an email.

Councilman John Duran voted in favor of the project citing the revenue stream that hotels generate for the city. Transient occupancy taxes require hotels to give a percentage of revenue from room rentals back to the city. West Hollywood’s current rate for the tax is 12.5%.

“Any time we add hotels to the city, it helps us provide critical services to more of our vulnerable residents,” Duran said.

Both Duran and Councilman John Heilman said they considered the impact that the House of Blues had on the surrounding neighborhood when they voted to move forward with the development. Heilman specifically cited traffic, noise and behavior outside of the club as influences on his decision.

“The House of Blues was a great venue, but it also had a significant impact on the neighborhood, especially when it started to use some promoters who weren’t concerned about the community,” Heilman said.

Additionally, Duran emphasized the importance of incorporating entertainment and nightlife activities into the development for it to fit with the makeup of the Sunset Strip.

“Entertainment, music and nightlife are central to West Hollywood’s identity, and Pendry West Hollywood is committed to keeping the music alive with the first new music venue in West Hollywood in 20 years,” said Ronald Haft, founder and chairman of Combined Properties.

When the property and residences open, guests and residents will have access to the hotel’s music venue and all other amenities, including a screening room, a rooftop pool and bar, and in-residence dining and catering by Michelin-starred chef Wolfgang Puck.

The first of the Pendry Residences became available on Nov. 7, with listings starting at $3 million.

According to Current and Historic Preservation Planning Manager Jennifer Alkire, the Pendry Hotel project’s environmental impact review, which was certified in 2010, identified traffic impacts at four intersections: Flores and Fountain, La Cienega and Sunset, Olive and Sunset, and Crescent Heights and Sunset. Alkire also said that the project is designed to fully meet code requirements for parking.

In addition, the development has met all seismic requirements for building on a fault zone under the California Building Code, according to Haft.

Council takes next step to snuff out flavored tobacco