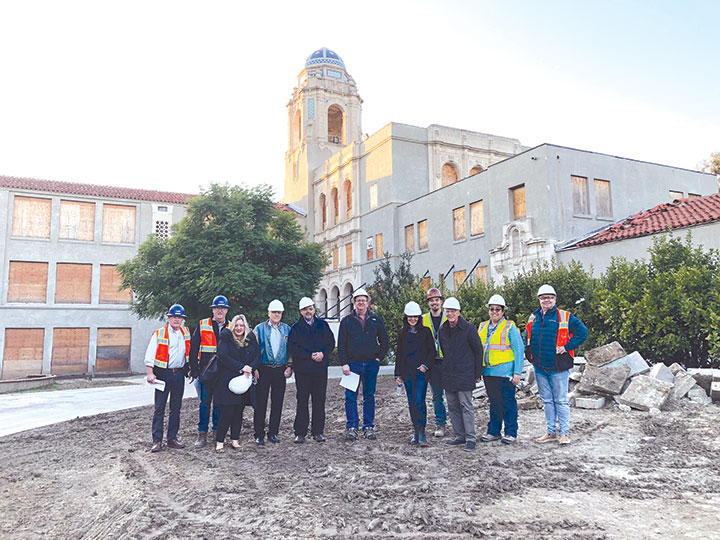 One of the biggest challenges has been completing the necessary updates while maintaining the original integrity of the building, said Jeff Pylman, executive bond program manager for Team Concept Development Services, Inc., which manages BHUSD’s construction program.

“Our goal is that when we’re done building it and re-modernizing it, we haven’t altered the original structure to where the state will not renew our state registration and recognition as a historic building,” Pylman said.

Each portion of the structure, designated by crews as Buildings A-E, poses its own unique challenges, Pylman said. Building A serves as the anchor, with Buildings B and C flanking it on its right and left sides, forming an L-shaped structure. Later, Buildings D and E were added as extensions.

In Building B, a single-story structure that houses kindergarten and music classrooms, all structural cracks have been identified and the flooring is being removed to prepare for foundation upgrades. Crews discovered an ornate mantle in the kindergarten classroom during demolition and are working with the project’s design team to incorporate it.

Building A also has historical pieces that crews have preserved, such as original terra cotta floor tiles, hand-painted ceilings and a large mural. Most of the historical touches can be found in the auditorium’s first and second floor lobbies.

Additionally, structural enhancement of the balcony, replication of a plaster cathedral ceiling and extensive roof repairs are ongoing in the auditorium. Crews removed the original theater seats, replicas of the old theater style seating, and will renovate and reinstall them when the completion of the project nears.

Outside the balcony, the auditorium’s second floor lobby adjoins to a series of classrooms and the school’s former library that shape Building C. While the goal is to restore the original corridor outside of the classrooms, the learning environments will be updated.

Buildings D and E will house classrooms, the school’s cafeteria and kitchen, administrative offices and reception area. At the beginning of the year, crews will create footings in Building D’s foundation.

Priorities will also include upgrading structural steel reinforcements. The campus is currently vacated, but is expected to return to full occupancy by 2022, according to a 2018 BHUSD Master Plan update.