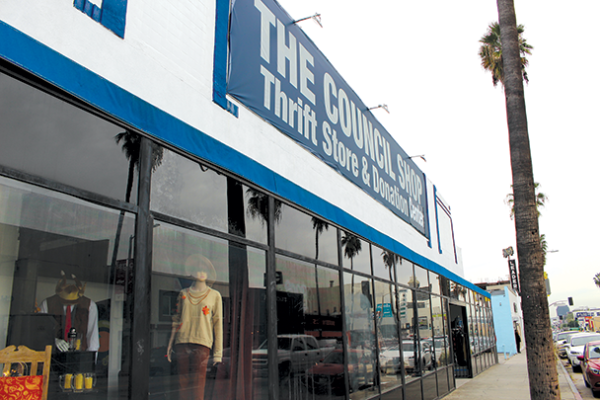 The National Council of Jewish Women-Los Angeles thrift stores, like the one at 360 N. Fairfax Ave, accept donations daily. (photo by Morgan Keith)

The National Council of Jewish Women, Los Angeles is altering its annual clothing giveaway for a year-round version of their existing voucher program.

The clothing giveaway, which was held annually in early December and was open to the public, provided bags of clothing pulled from excess donations to NCJW’s thrift stores.

However, donations to NCJW-LA and its thrift stores, which all accept donations, have dropped significantly, leading the nonprofit organization to cancel the event.

According to Chief Program Officer Rachel Resnick, there simply aren’t enough goods to collect from the stores to give away all at once.

Focusing on the voucher program will allow the availability of clothing to be more cyclical, rather than having one big giveaway a year, according to Resnick.

“I think in a lot of ways the clothing giveaway was impactful on a one-day basis, but we know that people don’t only need clothes in December,” Resnick said. “Being more thoughtful and intentional about how it’s working will ultimately serve the community in a stronger way.”

NCJW-LA has over 30 community partner organizations, such as Jewish Family Services, Cedars-Sinai Medical Center, Didi Hirsch Mental Health Services and others, that receive vouchers to give to their clients, who can redeem them in any of their thrift stores.

Many of the people who received clothing at the annual giveaway were notified of its discontinuation by NCJW-LA’s community partner organizations.

They will have continued access throughout the year to clothing donations through vouchers provided to community partners.

Vouchers are $40 for adults and $25 for children age 7 and younger, according to a website for the Karsch Center at Wilshire Boulevard Temple, one of the community partner organizations.

Individual vouchers are being added to diversify the program, and recipients must meet one of four requirements listed on NCJW-LA’s website to receive a voucher.

Requirements include receiving or having a family member who receives financial assistance from a government agency; receives Medicare under the age of 65 or is enrolled in Medi-Cal; meets low-income standards set by the U.S. Department of Housing and Urban Development for Los Angeles County; or recently lost a job, is looking for a job, or starting a new job.

Individuals applying for vouchers directly from NCJW-LA are screened by Maria Vasquez, the organization’s critical response coordinator, with a new batch of vouchers made available every 12 months.

“We think we can serve more people. We think we can ultimately give them more goods, but just so that it’s spread out over 12 months, spread out to all of our stores … still providing the service to people without it being concentrated on one day,” Resnick said. “We want to continue to be a good resource for the community and we’re working to make sure the program serves the community in the best way possible.”