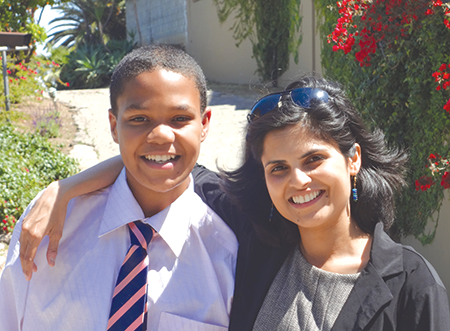 Aishwarya Bhave has found serving as a Court Appointed Special Advocate rewarding, and encouraged others to join the program. (photo courtesy of Aishwarya Bhave)

Computer engineer Aishwarya Bhave said she’s always enjoyed working with children though tutoring. However, she felt she could do more for kids in need.

More than seven years ago, she heard about CASA/LA, the Court Appointed Special Advocates for Children of Los Angeles. Now, she advocates on behalf of two children in the foster-care system, providing assistance as the children navigate the legal system and other governmental programs, as well as support for them on a personal level.

“Representing the [child’s] needs in front of an authority is only one part of the work. The other part is most certainly forging a connection with the child. A lot of these children are traumatized, but they also have ongoing trauma from not having a support system,” Bhave said.

Bhave spends approximately 15 hours per month bonding with the two children from the foster care system. Though she can’t release much information about them for privacy reasons, she said one was a teenager when they met, and the other was a toddler. Along with hearings and court appearances, she also takes them out for meals and activities like playing laser tag and jumping on trampolines.

“A lot of my work involves just being there, showing up and being a friend,” Bhave said.

“We’re looking for 8,000 volunteers total over the next 10 years, but right now, we have 300 children on our waitlist who need volunteers,” Julien said.

Foster children are often moved between foster homes and group homes too frequently, preventing them from establishing any consistency at home or school, Julien said. The foster-care system is also overwhelmed, meaning without an advocate, children can be overlooked and potentially lose access to a good education, medical care, or even an adoption or reunification with their families.

“A CASA can speed along the process of getting a child successfully out of foster care and helping them thrive while in foster care,” Julien said.

Beyond volunteers, CASA/LA is also seeking donations, Julien said, as less than 10% of the organization’s budget comes from government funding. CASA/LA needs money to recruit and support volunteers, as well as connect foster children with services beyond the scope of their court-appointed lawyer.

“With our funding, we provide services for our young people that the county won’t pay for, sometimes a trip to Disneyland or a new medical bed that they need because of a medical condition, or a taekwondo uniform. There are multiple things that we use our funding for,” Julien said.

“Lots of our volunteers are working people or people with small children … This is a great opportunity to make a tangible difference in someone’s life,” Julien said.

Beyond the rewarding feeling of having an impact on someone’s life, Bhave said being a CASA is a great way to fulfill a societal obligation to one’s community.

“The way I look at it is that these children belong to all of us. We as a society decided that we would take care of them instead of the family … [CASA] has really impacted me in my view of what I should be doing as a member of my society. I wrestle with that, that my community is as successful as I make it, and I truly believe that,” Bhave said.

For information, to donate or to apply to be an advocate, visit casala.org.

“You don’t even have to get off the couch,” Julien said.