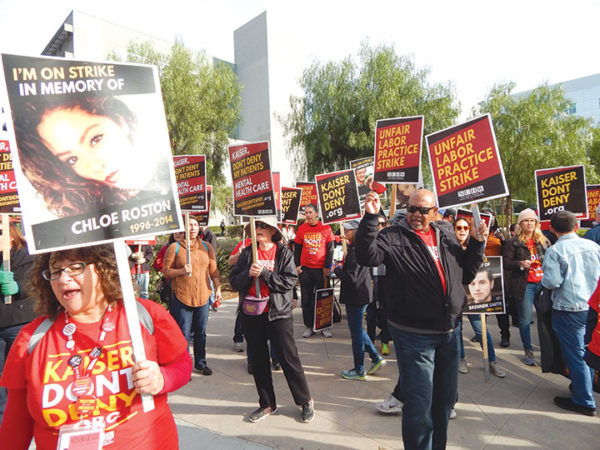 Members of the National Union of Healthcare Workers protested outside the Kaiser Permanente hospital in Hollywood. Some carried signs with photographs of people who took their own lives. (photo by Edwin Folven)

Fairfax District resident Haley Pollock, a student at Southwestern Law School, said she found herself crying frequently and was overwhelmed during the last week of October and decided to seek professional help. She was suffering from minor depression.

As a Kaiser Permanente healthcare plan member, she scheduled an initial appointment and went through the intake process. The next step was to be assigned to a therapist.

“I’m still waiting,” Pollock said. “It’s really frustrating. I have spent over six hours on the phone and have filed a grievance, and I still don’t have an appointment.”

Pollock was among hundreds of protesters who demonstrated on Dec. 17 outside Kaiser Permanente’s Los Angeles Medical Center at 4867 W. Sunset Blvd. The demonstration organized by the National Union of Healthcare Workers was part of a week-long series of protests at Kaiser facilities throughout the state.

“This is about patient care. We need a priority placed on patient care,” said Marty Needleman, a licensed marriage and family therapist for Kaiser and NUHW member. “People are referred and they never get in touch with therapists. The people come in but they never get the treatment.”

Needleman said there are approximately 3,000 Kaiser Permanente employees specializing in mental health treatment, including licensed social workers and therapists. The number of patients needing care exceeds 10,000, he said, prompting long wait times for people seeking treatment. Needleman said he has heard stories of people waiting months to see a therapist. He called on Kaiser to increase the number of employees to handle the workloads.

“We don’t have enough staff to handle the population of people Kaiser has to be treated,” Needleman said. “We need more staff, more locations for the staff and more patient management time. There is not enough time to handle the paperwork and phone calls and to help patients with resources.”

In a statement attributed to Annie Russell, chief operating officer of Southern California Permanente Medical Group, Kaiser Permanente  said hospitals and clinics would remain open during the protests and that there would be no disruptions to treatment. Patients who need urgent mental health care and medical care receive priority treatment, and sometimes non-urgent appointments must be rescheduled. Russell also said Kaiser is in the process of establishing a new labor agreement with NUHW and the demonstrations are detrimental to the well-being of patients.

“We have been jointly working with an external, neutral mediator to help us reach a collective bargaining agreement with the National Union of Healthcare Workers. The mediator recently delivered a proposed compromise to both sides that we are seriously considering. However, the union has rejected it and announced plans to strike instead of working through the mediated process,” Russell said. “We believe that NUHW’s repeated call for short strikes is disruptive to patient access, operational care and service, and is frankly irresponsible. Although Kaiser Permanente will make every effort to minimize patient disruption, due to the strike we may be forced to reschedule appointments and devote valuable resources needed elsewhere in our organization to instead address the continuity of care for our members and address any urgent patient care issues. A strike does nothing to help our important work to advance care, nor does it help us. Rather than calling for a strike, we ask that NUHW’s leadership continue to engage with the mediator and Kaiser Permanente to resolve these issues.”

The promise to continue working toward a solution did little to placate the demonstrators outside the medical center in Hollywood. Deborah Silverman, a licensed clinical social worker for Kaiser Permanente, said she is hopeful there will be better ways to provide better service under improved conditions for employees.

“People can’t take months and months, and never get treatment,” Silverman said. “We are hoping there will be a change.”

“They are doing this to people who have no other means,” Pollock added. “I am OK, but what if I wasn’t?”