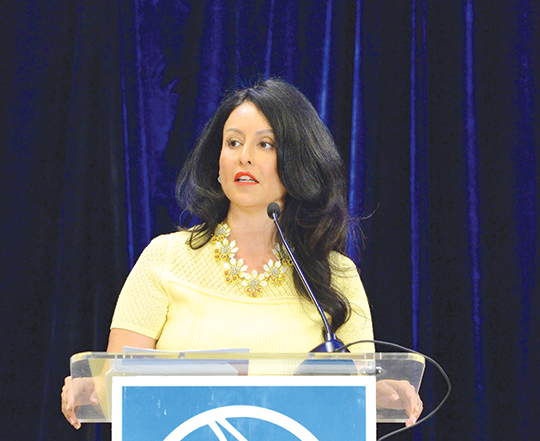 “I want to thank Council President Wesson and my City Council colleagues for their overwhelming support and partnership,” Martinez said. “As the daughter of Mexican immigrants, it is not lost on me that in one of the most diverse cities in the world and the second-largest city in the nation, I will soon become the first Latina City Council president in Los Angeles’ storied history. Any feelings of pride are eclipsed by an enormous sense of duty to work hard each and every day – as my parents taught me – to do what is right and just for the residents of the city of Los Angeles. I look forward to bringing a woman’s perspective and families-first agenda to the president’s chair and working with my dedicated council colleagues and Mayor Garcetti to ensure resources, services and opportunities abound for Angelenos in all 15 Council Districts.”

During a City Council meeting on Dec. 3, the council voted to approve a motion by Wesson allowing him to step down from his duties as council president. Wesson held the position since November 2011 and will remain on the council.

“I am so proud to be a part of this new leadership team in L.A. City Hall with the historic inauguration of the first Latina Los Angeles City Council president,” Buscaino said. “I am so excited to be standing alongside a woman as she leads this council into the new decade. It’s a time of challenges and opportunities, and I believe Council President-elect Martinez is just who we need at this moment. I am most excited about working with [her] because she shares my sense of urgency about addressing our most pressing problems.”

Garcetti also praised Martinez’s service and congratulated her on the new role on the council.

“For me, the best parts of public service are making a difference in the lives of Angelenos, working alongside incredible people and having a front row seat to history,” Garcetti said. “Nury Martinez’s elevation to council president is like experiencing all of them at once. I congratulate a friend and leader who has earned the trust, confidence and respect of her colleagues and having served in that role, I know that she will be an outstanding partner in confronting our biggest challenges and pointing Los Angeles to the future. I look forward to working closely with her, and wish her well in an extraordinarily important job.”

Martinez will outline her goals as council president at the Jan. 14, City Council meeting.

LAHSA executive director to step down at end of the year