‘Let It Go’ at the Hollywood Pantages ‘Frozen’ this winter 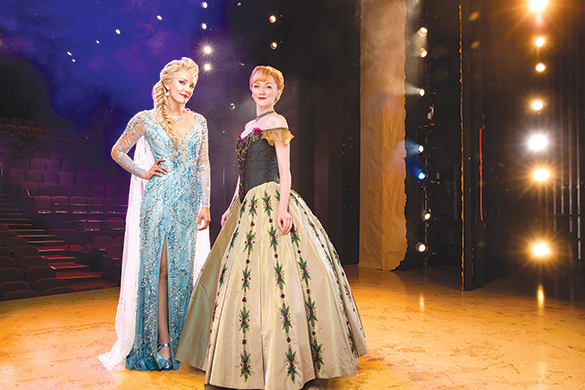 Caroline Bowman stars as Elsa and Caroline Innerbichler as Anna in a production of “Frozen” at the Hollywood Pantages Theatre. (photo by Matthew Murphy for MurphyMade)

In “Frozen,” one sister struggles with being an outsider and harnessing her powers within while the other sets out on a thrilling adventure to bring her family together again. Both are searching for love, but they’ll learn that to find it they’ll have to look inside themselves first.

The production features songs from the original Oscar-winning film and an expanded score with a dozen new numbers by the film’s songwriters Kristen Anderson-Lopez and Robert Lopez.

A limited number of $25 tickets will be offered at every performance through a digital lottery hosted online by Broadway Direct. Enter by visiting broadwayinhollywood.com/lottery.

The lotteries will open two days prior to each performance at 11 a.m. and close one day prior at 10 a.m. Winners will be notified within minutes of the lottery closing and will have one hour to pay for their tickets online with a credit card. Tickets are available for pickup one hour prior to curtain; identification is required. Winners are limited to two tickets priced at $25 each.

Showtimes for “Frozen” are 8 p.m., Tuesday through Friday; 2 and 8 p.m., Saturday; and 1 and 6:30 p.m., Sunday. The performance schedule will vary during holiday weeks in late December.

The Hollywood Pantages Theatre is located at 6233 Hollywood Blvd. For information, call (800)982-2787, or visit broadwayinhollywood.com/frozen.

Get wild on weekends at the Los Angeles Zoo