‘Knives Out’ dishes out a quirky, unconventional whodunnit 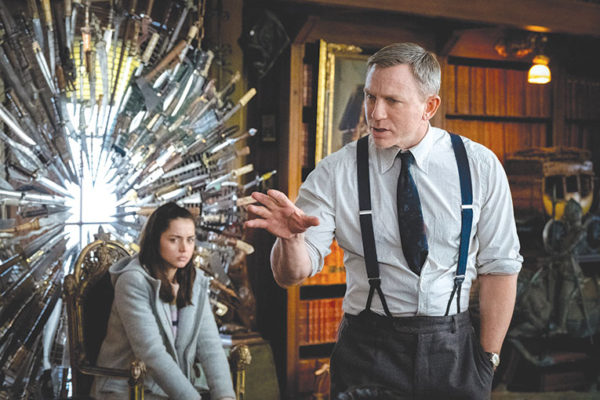 Daniel Craig as Benoit Blanc and Ana de Armas as Marta are standouts in “Knives Out.” (photo courtesy of Lionsgate)

Director Rian Johnson’s career is a curious one. First, the indie noir “Brick,” then trippy time traveling “Looper,” followed by “Star Wars: The Last Jedi,” which gives expectation the middle finger just as much as J.J. Abrams’ “The Force Awakens” provided derivative fan service. Now comes “Knives Out,” Johnson’s fourth feature, a whodunnit with a sea of twists, turns and marvelously quirky characters. It’s a blast, never dull, constantly usurping where this kind of film should go.

Of course, Johnson defies all the narrative safety nets of the genre. We begin weeks after the demise of Harlan Thrombey (Christopher Plummer), acclaimed murder mystery novelist and family patriarch. Lt. Elliott (Lakeith Stanfield) believes it’s a standard suicide, but when renowned P.I. Benoit Blanc (Daniel Craig) – whom the Thrombeys all know from a New Yorker profile they absolutely must reference to cement their bougie position as cultural elites – requests to work the case, no officer can deny the appeal of rubbing shoulders with such an infamous detective.

So, all parties involved undergo another line of interviews before the coroner officially declares the death a suicide. But who could the culprit be? Is it eldest daughter Linda Drysdale (Jamie Lee Curtis), husband Richard (Don Johnson) or their son Ransom (Chris Evans)? How about Harlan’s son Walt Thrombey (Michael Shannon), his racist wife Donna (Riki Lindhome) or “Nazi internet troll” son Jacob (Jaeden Martell)? Or perhaps widow Joni (Toni Collette) or her daughter Meg (Katherine Langford)? 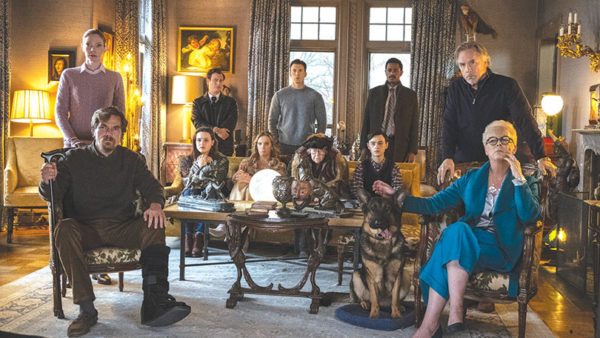 The Thrombey family is comprised of an ensemble cast, and makes “Knives Out” an awards season frontrunner. (photo courtesy of Lionsgate)

The players are all cruel in their own ways, motives a plenty. With so many moving parts, our P.I. enlists the help of Harlan’s personal caretaker, Marta (Ana de Armas), who has a special ability: the mere thought of lying makes her ill, and telling a lie actually induces vomit. The unlikely pair – a Southern Sherlock and a Latina immigrant from a country no one seems to correctly name – revisit the grounds for clues and pore over testimony to determine everyone’s whereabouts.

“Knives Out” is an awards season frontrunner and an easy win for the Golden Globes’ mostly vacant comedy-musical category (though “Rocketman” is a solid second there). The direction, writing and performances coalesce in a memorable experience more than anything else this year.

Sure, Shannon has a long resume of creepy characters, but watching the one and only Captain America Chris Evans, the marvelous Toni Collette and the O.G. scream queen Jamie Lee Curtis ham it up as a family of entitled, spoiled brats makes for very theatric viewing.

And a special nod belongs to de Armas. Amidst such an enormous ensemble cast, her Marta serves as a compelling protagonist. It might be easy to just focus on Craig or all the other crazies on display, but Marta is just as quirky as the rest. But she also serves as the moral compass, allowing the film’s deeper meaning to bloom.

Time for some hard truths. All art is political. Trying to avoid art with an “agenda,” a truly worthless word with little beneficial meaning, fills the back catalogue of Amazon Prime’s genre category: a whole lotta trash. How else can an affluent white family’s debate about building a border wall (I wonder what that’s a reference to) and the ideal immigrant be understood?

Throughout this comedy-mystery is an even more compelling story about overt bigotry and white liberalism that caves to the allure of money. When a political position costs you nothing, you can sound as woke as possible. It’s the classic dilemma between charity (where the rich still control the narrative, earning praise for minimal contributions) and equity (giving up personal praise in service of a fair system).

What’s next for these characters remains unknown, but Johnson poses some intriguing questions and even more stinging critiques. That’s where he shines the most: endings. “Looper’s” time travel logic falls flat, and “Last Jedi” has its naysayers (not me), but the man wraps things up with pizzazz. “Knives Out” delivers a neat package and poses a final moral query all too timely and necessary.