I watched all of the Netflix Christmas specials so you don’t have to, Part 2 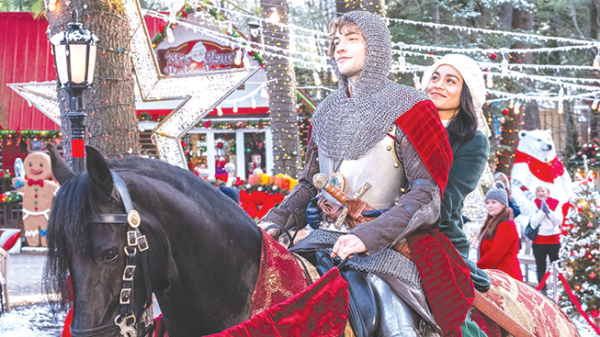 Vanessa Hudgens and Josh Whitehouse star in “The Knight Before Christmas,” a heartwarming film about a knight from long ago who appears in the future, and the love story that ensues. (photo courtesy of Netflix)

The streaming wars are upon us. Once, cord cutters only needed one of a few subscriptions in place of overpriced cable fees. But the big four media conglomerates refuse to go down, offering their own options. In response, Netflix hopes to keep customers happy with all the trash once reserved for the Hallmark Channel and a dining table of other arrangements. Before 2019, this included a growing handful of hokey Christmas and holiday films. This year, Netflix is drunk on its own nog.

The 2019 holiday season gives us four sappy Christmas films, a teen rom-com, an animated feature, two scripted series, two baking shows, a miniseries and assorted seasonal episodes. To call this all too much is pointless. After all, ‘tis the season to over eat and over spend, so why not match a host of other bad habits with binge watching a variety of festive choices that can truly deck the halls or complement that lump of coal in your stocking.

Original series “Sugar Rush” and “Nailed It” embark on the Food Network’s programming, the former a run-of-the-mill speed baking competition, while “Nailed It” actually earns Golden Globe noms for pitting terrible amateur bakers against each other to see how wretched their doughy treats can get. Slap “holiday” and “Christmas” on them, and two seasonal spinoffs are born. If you like baking shows, these keep the spirit of the original premises and the season itself alive.

The global market might favor very different material as we near the winter solstice, but token interest still exists. Enter the German miniseries “Holiday Secrets” and Norway’s “Home for Christmas.” The former is all drama, while the latter feels closer to millennial dramedies flooding cable networks.

Since some series drop all episodes at once, an entire holiday-themed one can rain down eight episodes while their broadcast kin only get a single episode aired before it shuts down until the new year. So, while “Merry Happy Whatever,” can work, it’s a mess. Not a single joke lands, despite vain efforts of a faux live audience dictating how we should feel. A couple of Angelenos visit the family in Philly, and cliché West Coast jabs follow.

Remember “A Christmas Prince”? Well, that’s a trilogy now. We’ve survived the introductions, wedding and now labor. Who can fault “iZombie’s” Rose McIver? She needs the work, and getting wooed by a prince from a fictional kingdom more than pays the rent. For that matter, Sonequa Martin-Green, the lead of “Star Trek: Discovery,” has plenty of time to kill while CBS drags its feet on “Discovery’s” season three. So why not play opposite a New York DJ rediscovering his roots in “Holiday Rush,” a particularly painful Christmas film complete with a full-song performance by Darlene Love.

“High School Musical” star Vanessa Hudgens has a new winter job: Christmas films. Last year, she played two characters in “The Princess Switch.” Comparably, she tones things down this year in “The Knight Before Christmas,” depicting a chivalrous dude from long ago sent into the future. Like Thor, this man from another age doesn’t understand our ways, but love transcends centuries. It’s every bit as schmaltzy as you expect, and clearly Amazon paid for all that Echo product placement.

It’s also oddly meta. Our knight spends his first evening in the modern era watching TV, including a brief shot of last year’s “The Holiday Calendar.” And, when the hopeful love birds decide to binge watch TV together, they view “Holiday in the Wild,” another new contribution.

Parks and rec in the city

You know how it goes: once the kid goes off to college, hubby immediately calls off the marriage. In response, Kate (“Sex in the City’s” Kristin Davis) embarks on a vacation to Africa but decides to extend her stay and aid elephants on a massive preserve. Local Derek (Rob Lowe) serves as a friend and possible suitor. Sure, it’s watchable enough, but holy white saviors, Batman!

“Let It Snow” is actually rather cute by normal standards. A fun flick about small town life during a crazy snow drop, featuring several kinda familiar faces. That girl from the new “Sabrina” (Kiernan Shipka). The other one from the latest “Dora” film (Isabela Merced). The bestie from the recent “Spider-Mans” (Jacob Batalon). Also, the lead voice actor from “Spider-Man: Into the Spider-Verse” and star of “Dope” (Shameik Moore). And, Joan Cusack driving a tow truck around town sporting aluminum foil on her clothes. 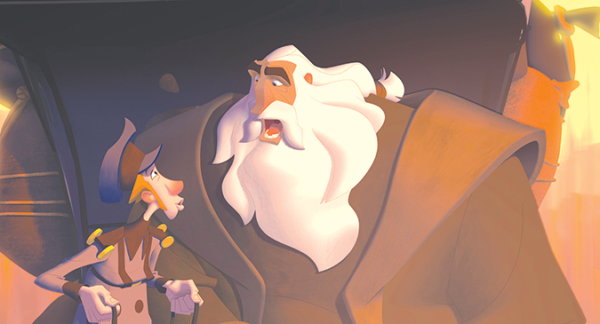 “Klaus” is a delightful animated holiday film about the origin of the legend of Santa. (photo courtesy of Netflix)

No lowered bar or obligation to Christmas nostalgia, “Klaus” is a delightful animated feature. First-time directors Sergio Pablos and Carlos Martínez López knock out a visually stunning original story about the birth of the Santa legend in an isolated community. With the help of a spoiled postal worker (Jason Schwartzman), a recluse named Klaus (J.K. Simmons) would eventually become a legend. With an abundance of charm, this Christmas flick features one of the best endings in recent years.

Years with rain that is.