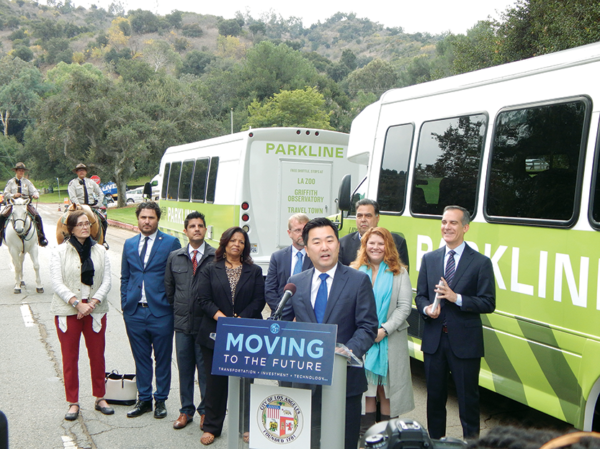 Councilman David Ryu encouraged people to use the new Griffith Parkline to access the park’s many attractions during the program’s launch on Dec. 3. (photo by Edwin Folven)

Visitors to Griffith Park have a new free option for getting to and from its many attractions using a new shuttle service that connects public transportation with sites such as the Griffith Observatory, Greek Theatre, Hollywood Sign, Los Angeles Zoo, Autry Museum of the American West, Travel Town and Park Center, which is near the merry-go-round, picnic areas and sports fields.

Los Angeles Mayor Eric Garcetti and City Councilman David Ryu, 4th District, joined city staff and community members on Dec. 3 for a launch of the new Griffith Parkline, which will begin service on Saturday, Dec. 7.  The Parkline will operate on weekends from noon to 10 p.m., giving passengers a new way to travel during what officials said is the peak time for park usage.

The shuttles will run every 15 to 20 minutes. People can park in lots near the shuttle stops and ride the Parkline to all destinations within Griffith Park, and access the shuttles at a stop at Los Feliz Boulevard and Riverside Drive that also serves as a Metro bus stop.

“If we want to get more people out of their cars, we need to provide convenient, sustainable alternatives that take riders where they need to go,” Garcetti said. “Griffith Park is one of our city’s most iconic destinations, and this new shuttle will encourage visitors to enjoy it without a vehicle, protecting its natural environment and making it easier to access the park’s incredible attractions.”

Ryu said he considers Griffith Park an oasis in the middle of a densely-populated urban area and encouraged visitors to take advantage of the new mode of transportation.

The Griffith Parkline will augment DASH and Metro service. The DASH Observatory route runs from the Metro Red Line station at Sunset/Vermont through Los Feliz to the Griffith Observatory and back. Metro offers bus service to and from the Sunset/Vermont subway station via Vermont Avenue and Los Feliz Boulevard on the southern edge of Griffith Park, as well as a line along Crystal Springs Drive on the eastern end of the park. Passengers can use the DASH and Metro lines to connect to the Griffith Parkline shuttle.

“Creating a network of opportunities while improving connectivity throughout the park will give many the option of enjoying all Griffith Park has to offer,” said Mike Shull, general manager of the Los Angeles Department of Recreation and Parks. “The Parkline shuttle fulfills Recreation and Parks’ goal and commitment to the community. It is the most convenient, accessible and environmentally friendly way to get around Griffith Park.”

Ryu spokesman Mark Pampanin said the Parkline is being paid for by money collected from parking fees at the Griffith Observatory. The shuttles are ADA-accessible and include seating for 25 passengers, as well as bike racks. The city will later gauge public interest and consider whether to expand the program and add more stops.

“At LADOT, we pride ourselves on connecting Angelenos with experiences,” General Manager Seleta Reynolds said. “The new, free Parkline service will give residents and visitors alike the chance to explore each of Griffith Park’s iconic locations while cutting traffic and improving the experience for everyone.”

For information and a map of the Griffith Parkline route, visit laparks.org/griffithpark/planyourtrip#Parkline.