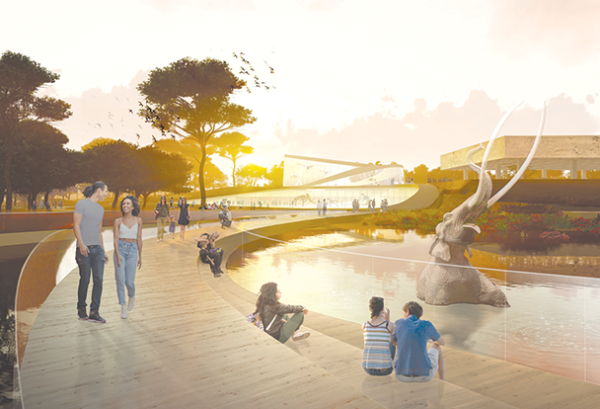 WEISS/MANFREDI’s vision for the La Brea Tar Pits and Museum includes a bridge over the lake along Wilshire Boulevard. (rendering courtesy of WEISS/MANFREDI)

The Natural History Museums of Los Angeles County has selected the firm WEISS/MANFREDI to lead the re-envisioning process for the La Brea Tar Pits and Museum.

Dr. Lori Bettison-Varga, president and director of the Natural History Museums of Los Angeles County, announced the selection on Dec. 11 and stated that WEISS/MANFREDI will work with NHMLAC on a multi-year process of public engagement, master planning, design and construction at the 13-acre tar pits campus. The firm was chosen from a field of three that also included Dorte Mandrup and Diller Scofidio + Renfro.

“We are excited to move forward with [the] remarkable team as we work toward a more integrated experience of the museum and the landscape in Hancock Park while increasing community access, preserving the site’s iconic features and developing a more sustainable infrastructure for the next 50 years,” Bettison-Varga said. “It was a difficult decision, as all three teams put forth compelling and creative conceptual approaches. But in the end, there was consensus in the feedback we received from the competition jury and selection committee, NHMLAC staff and board, and the Los Angeles community that WEISS/MANFREDI’s conceptual approach captured the imaginations of a broad cross section of audiences. We look forward to starting our master planning work with them in the new year.”

“There is truly no place in the world as magical as La Brea Tar Pits. We and our team are deeply honored and grateful for this once-in-a lifetime opportunity to reveal the multiple identities of the tar pits, the museum and Hancock Park,” said Marion Weiss and Michael Manfredi, principals at WEISS/MANFREDI. “Our ‘Loops and Lenses’ concept creates new connections between the museum and the park, between science and culture, and envisions the entire site as an unfolding place of discovery. We are thrilled to begin work with Dr. Bettison-Varga and NHMLAC to rejuvenate the tar pits and the museum and carry them into the future and into the public imagination.”

WEISS/MANFREDI’s proposal, which was unveiled in August during a public meeting featuring all three finalists. The firm’s plan calls for a looping configuration of pathways in the park to improve visitors’ access and engagement with the tar pits and museum. The plans call for the lake along Wilshire Boulevard to be expanded and the mammoth statues currently there to stay.

The plans also call for the museum to be recreated on a plateau with a new wing constructed to the northwest, expanding the amount of exhibition space available. The idea is to have buildings with partly translucent glass exteriors to further connect people inside the building with the surrounding park, and vice versa.

The display prepared by WEISS/MANFREDI can be viewed in the Tar Pits Museum and by visiting tarpits.org.