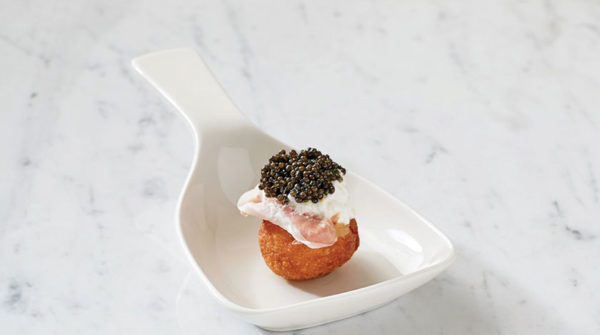 Last week, I met some friends at the restaurant, located on the ground floor of the Beverly Center, and we had the good fortune to meet Sobel. The affable chef started cooking with his grandmother “Nana Lu” when he was 4 years old. In his teens, Sobel started working in some of the best kitchens while earning his degree from the Culinary Institute of America in Hyde Park, New York.

He was the chef de cuisine at Restaurant Guy Savoy at Caesars Palace in Las Vegas, earning two Michelin stars.

During the holidays, Sobel is collaborating with No Kid Hungry in presenting a five-course Bona Furtuna menu, with a portion of the proceeds going to the organization.

Sobel visited our table describing how he mareries California ingredients with Sicilian salt, olive oil and tomatoes from the Bona Furtuna farm in western Sicily.

We sipped a glass of pale yellow sparkling Sei Uno Prosecco, which offered flavors of apple and hazelnut. It was crisp, clean and paired nicely with a bite-sized, deep-fried dough sphere topped with a soft and creamy egg, cheese and a generous scoop of osetra caviar. These sturgeon fish eggs are one of the most prized and expensive types of caviar. This three-bite “spuntini” captured Sobel’s culinary talents and was the perfect balance of flavor and presentation.

We all smiled when bowls with amberjack crudo arrived with stuffed, sweet red peppers. Sylvetta, wild rocket arugula leaves, were laid on top of the thick amberjack slices, offering a hint of pepper, and a citrus sauce made from kumquats finished the dish.

“I have to tip my hat to Steve Luczo,” said Sobel, talking about the retired Seagate CEO and founder of Bona Furtuna farm. “He purchased land in Corleone, Sicily, where his grandparents were born, and created a sustainable farm.”

Another favorite dish was the primi Gemelli Trapanese made with hand-rolled, spindle-looking noodles cut into bite-size pieces and served with langoustine, toasted almonds and an almond pesto made with Bona Furtuna olive oil. Pecorino cheese was shave on top of the comfort food dish. It paired well with a glass of 2016 Cascina Adelaide Nascetta from Langhe. The pleasing funkiness of this orange wine’s lovely floral and stone-fruit notes was a good match with the pasta.

Our secondi was two fennel-dusted pieces of Heritage pork loin on top of a lardo-wrapped scallion, and slices of poached pear and grilled radicchio underneath. If you haven’t tried a lardo-wrapped scallion, you must. It’s as good or better than a prosciutto- wrapped asparagus. The marinated pork chops were rubbed with the farm’s Sicilian herb blend and brined in the farm’s olive oil with some balsamic vinegar. A smooth Barolo wine complemented the dish splendidly.

We finished with two Siciliano desserts, starting with a pistachio, chocolate and ricotta cannoli with a bowl of blood orange sorbet and an almond and vanilla cream.

Try Sobel’s favorite artisanal liqueur, Amarea amareo d’arancia Rossa. Known as a “farm to bottle” spirit, Amarea is made from hand-picked blood orange peels and herbs from Catania, Sicily. It’s smooth, sweet and very satisfying. Sobel imports it directly from the Bona Furtuna farm and is offering the products for purchase as gifts during the holidays.

A variety of gift boxs are offered for the holidays, with a percentage of the sales benefitting No Kid Hungry.

I watched all of the Netflix Christmas specials so you don’t have to, Part 2