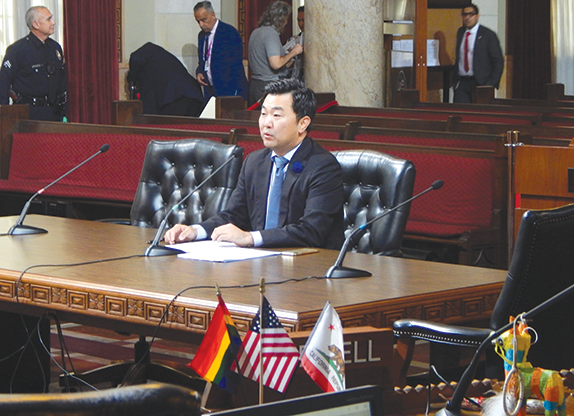 Other portions of Ryu’s proposal, including a more stringent developer ban supported by the Los Angeles City Ethics Commission and a ban on behested payments – donations to nonprofit and governmental groups made at the request of an elected official ­­– were held for further study by the council’s Rules, Elections and Intergovernmental Relations Committee last month.

Ryu said the vote on banning developer contributions was “bittersweet.” Though he was pleased to see the reform move forward, Ryu said, “it’s bitter because it doesn’t go far enough.”

Other council members agreed, and several encouraged their colleagues to push for publicly funded elections, which Councilmen Mike Bonin, 11th District, and Mitch O’Farrell, 13th District, called the only true path to elections untainted by outside money.

“If you really believe in clean money, [the developer contribution ban] is at best a Pyrrhic victory,” Bonin said.

Bonin also took issue with the proposed start date for the developer campaign contributions ban, which will go into effect for the 2022 council elections. Ryu is running for re-election in 2020.

“Mr. Ryu, it’s a little disingenuous for you to propose this when it doesn’t apply to your election,” Bonin said.

Ryu has not accepted campaign contributions from developers since he first ran for City Council in 2015, Ryu spokesman Mark Pampanin said.

“Councilmember Ryu wouldn’t ask the city to do something he wouldn’t do himself,” Pampanin said.

The delay is intended to allow time for a database of prohibited developers to be assembled so that candidates will know from whom they cannot take money. Last month, representatives from the Los Angeles City Ethics Commission estimated that the database would take months to build, preventing its use in the 2020 elections.

“I think before you do anything that takes resources away from poor people or has any potential to do that, you have to be sure you’re doing it right,” said Councilman Marqueece Harris-Dawson, 8th District.

An amendment proposed by Councilman Paul Krekorian, 2nd District, to lower the disclosure threshold for behested payments to $1,000 was sent to the Rules Committee for further study.

“While public financing would certainly be the best way to eliminate any possibility of undue influence because of money, the next best way is full transparency and ensuring people understand where money is coming from,” Krekorian said.

At 11:45 a.m. on Dec. 6, additional information was added to this article regarding City Councilman David Ryu’s refusal to accept campaign contributions from developers.