Council takes next step to snuff out flavored tobacco 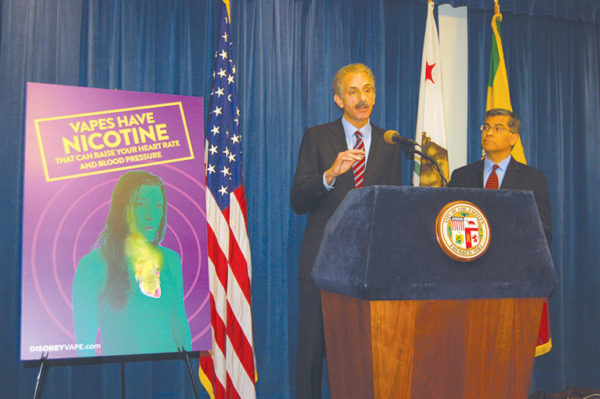 The motion approved by the council’s Health, Education, Neighborhoods, Parks, Arts and River Committee calls for the Los Angeles City Attorney’s office to draft an ordinance banning flavored tobacco products and return it to the full council for consideration.

“What we are seeking to do is to prohibit the sale of flavored tobacco products, while at the same time keeping the possession and use of tobacco products legal for adults 21 and over,” said O’Farrell, 13th District. “Vaping devices are a nicotine delivery product, and there are literally thousands of flavors marketed specifically to youth to get them hooked on tobacco products.”

The motion cites the harmful effects of tobacco products as reasoning for the need for a ban, including a higher risk of cancer, stroke and heart disease among users. The Los Angeles County Board of Supervisors previously banned flavored tobacco products in unincorporated areas, and a city of Los Angeles ban would make the restrictions more widespread. The U.S Food and Drug Administration estimates that more than 2 million high school-age students use e-cigarettes, and the flavored vaping liquids are driving the popularity among youth.

O’Farrell said the harmful effects of tobacco use are personal to him, having grown up in a household in which his parents smoked. He said his parents and grandparents died of smoking-related diseases, and he and his siblings suffer from lung damage caused by second-hand smoke.

“The damage of smoking and second-hand smoke can be directly attributed to a worsening quality of life in addition to billions of dollars annually in health-care costs,” O’Farrell said.

Los Angeles City Attorney Mike Feuer supports the ban on flavored tobacco products and is eager to see the new law enacted. In September, Feuer launched a public education campaign with the California Attorney General’s office warning youth about the dangers of vaping.

“We need to protect our kids from flavored tobacco products, like the kid-friendly flavors in vapes and cigarillos, because we know flavors like gummy bears and Captain Crunch appeal to kids, and that vaping is bad for kids’ health and a gateway to tobacco addiction.” Feuer said. “While the committee took an important first step, I urge the full council to go further. I’ve been pressing for a broader flavored tobacco ban, as L.A. County and San Francisco have done.”

O’Farrell pointed out that the proposed ban on flavored tobacco products includes exemptions for smoking lounges that are currently operating. It also allows the sale of menthol-flavored tobacco products in retail shops open only to individuals over 21. An additional requirement under consideration is a mandate that retailers verify IDs electronically through scanning instead of looking at the driver’s licenses and identification cards. That requirement would preclude people under 21 with fake IDs from obtaining tobacco products, O’Farrell said.

The council is expected to consider the ban in January. If the law is approved, code compliance officers in the city’s Tobacco Enforcement Program would be tasked with ensuring retailers adhere to the ordinance.