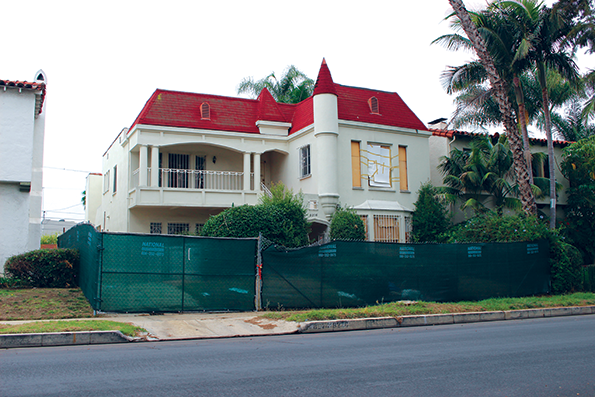 The Fourth Street Chateau is a two-story multifamily residence located on Fourth Street between Sweetzer and La Jolla avenues. (photo by Morgan Keith)

At its Dec. 3 meeting, the Los Angeles City Council voted to deny an application from Councilman Paul Koretz, 5th District, to designate the Fourth Street Chateau as a historic-cultural monument.

Both the Cultural Heritage Commission and the Department of City Planning found that the property does not conform with the definition of an HCM and recommended that the council not include the chateau in the city’s list of HCMs.

Cultural Heritage Commissioners Gail Kennard and Diane Kanner visited the property with staff from the Office of Historic Resources on Aug. 8.

After holding a public hearing, the commission voted at its Sept. 5 meeting and unanimously agreed that the chateau did not meet the standard of an HCM.

“Although the building retains some of the characteristic features of the architectural style … the property has experienced a significant number of alterations that cumulatively diminishes its historic integrity,” read the CHC report, which was released on Sept. 15.

To be designated as an HCM, a property must meet at least one of the standards outlined by the Cultural Heritage Ordinance. Because the chateau was not associated with any historic people or events, the only requirement it could potentially meet would be the embodiment of distinctive characteristics of a style, type, period or method of construction.

Constructed in 1936, the house was designed in the Late Chateauesque architectural style by contractor and speculative builder Mark A. Viner, who sold it the following year, according to the Cultural Heritage Commission’s report.

“It is imperative that the city’s historic-cultural treasures be celebrated, and foremost, that its historical sites be preserved for future generations,” Koretz said in his motion.

The commission’s report listed other “more exemplary” buildings in the Late Chateauesque architectural style like the North Sycamore Apartments and the French Chateau Apartments.

The commission’s recommendation was forwarded to the Planning and Land Use Committee, which upheld the findings and sent the decision to be voted on by City Council.

“It’s important that the city’s HCM monuments reflect the most important and significant places in the city and that we maintain a consistent high standard for determining which properties meet the criteria of the city’s Cultural Heritage Ordinance,” said Ken Bernstein, manager and principal city planner for the Office of Historic Resources.

The Los Angeles City Council abided by the recommendations of the commission and voted 14-0, with Councilman Joe Buscaino, 15th District, absent, to affirm the findings of city staff and deny the HCM designation for the Fourth Street Chateau.

SurveyLA, the citywide historic resources survey, identified the property as a contributor to the Fourth Street-Colgate Avenue Residential Historic District. However, HCM designation is reserved for buildings whose “historic merit” makes them stand individually, rather than buildings that contribute to a larger historical area, according to Bernstein.

When the council directed the Department of City Planning to initiate HCM designation proceedings for the chateau, the building’s demolition scheduled for July 13 was stayed. The chateau is now eligible again for demolition, but neighbors have reached concessions with its developers to preserve some of its existing architectural features, according to Koretz spokeswoman Alison Simard.