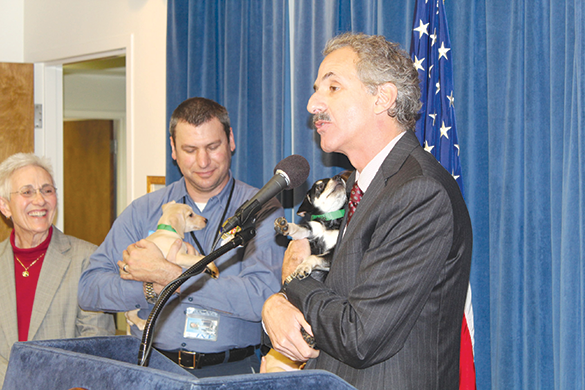 Los Angeles City Attorney Mike Feuer recently warned about online puppy-selling scams after authorities have seen an increase in the crimes. Feuer was joined by Los Angeles Animal Services’ General Manager Brenda Barnette at an event in which he encouraged people to adopt animals instead of purchasing them.

“The cuddly pictures will steal your heart, but the criminals behind these puppy scams will steal your money, sometimes into the thousands,” Feuer said. “Most victims who are swindled never get a puppy at all, others get different dogs with health or genetic problems, and the majority of victims are too embarrassed to come forward. Puppy scams are one more reason to adopt and not shop.”

In puppy-selling scams, perpetrators purport to offer dogs for sale on websites and in ads on Facebook, Craigslist and other social media platforms. They interact with victims by email, text or phone and convince them they have a pet to sell. Once the victim is emotionally invested, they are easier to scam, Feuer said.

After the victim pays for a puppy, the perpetrator directs them to a website they claim the consumer can use to track the pet’s delivery. The victim is often given a bogus tracking number, which continues to make the scam seem legitimate. A day later, the victim typically receives an email stating delivery has been delayed and that new fees will be charged. The scammers’ delivery website is often updated with this information too, which continues to give the impression that the sale is legitimate.

If a victim pays the fees, the perpetrators often demand additional money until the victim either can no longer afford to pay or realizes they’ve been scammed. By this time, the loss to the victim could be in the thousands, Feuer added.

Once the victim stops paying, the perpetrators sometimes threaten them with “animal abandonment.” Some will go so far as to create an additional website replicating one from law enforcement to frighten the victim and they will continue to email, text and call in attempts to get more money.

“If you are ready to add more love to your life and are considering a new dog or cat, visit one of our six Los Angeles City Animal Care Centers and meet some of our fantastic shelter guests who are hoping you will give them a home of their own before the holidays,” Barnette said. “The adoption fee for a dog is only $122 and includes vaccinations, a microchip, a city dog license and all pets are spayed or neutered.”

The city attorney’s office has identified approximately 4,500 complaints about puppy scams nationwide, with nearly 400 in California. The scams are also common for cats, horses and birds.

Warning signs include an asking price far below the normal rate for a particular breed, and an insistence that the pet be delivered as opposed to being picked up in person. Many scam perpetrators also require payment by money transfer, prepaid debit cards and apps, many of which may be unwilling to refund fees for fraudulent transactions. Also, search other websites to see if photographs of the pet in question is featured, which is a sign that perpetrators are using fake photographs.

Robbery illustrates dangers of being distracted in public