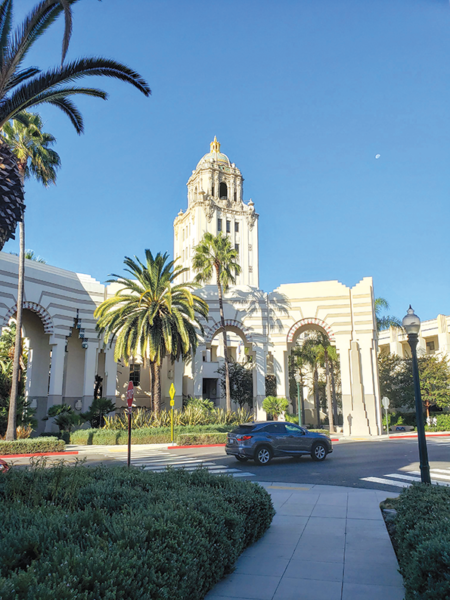 On Dec. 3, a contentious meeting of the Beverly Hills Traffic and Parking Commission revealed some opposition to the city’s Complete Streets Plan, though city officials said there is reason to believe the pushback is small compared to the amount of public support.

Multiple speakers praised the plan’s goals of creating streets that can be used by many forms of transportation, including vehicles, bicycles, public transit and pedestrians. In particular, speakers lauded the ideas that would make the city more environmentally friendly and improve safety for travelers of all types.

Public speaker Moore Rhys, a West Hollywood resident who works in Westwood and travels through Beverly Hills often, said Beverly Hills’ “infrastructure is built for failure,” and she often sees near-collisions between cars and pedestrians.

“This is a proposed first step to help us make sure that people don’t die in the streets,” she said.

Other speakers said the city is taking street parking spaces from residential property owners in order to create a more bicycle-friendly city. The Complete Streets Plan was born out of a Bicycle Mobility Plan in 2017.

Thomas White, chairman of the Municipal League of Beverly Hills, said the Complete Streets name is misleading, and once people realize that they might lose parking in order to create bike lanes, the pushback would be fierce.

“It’s called the Complete Streets Plan, not the Bicycle Utopia Plan or the Bicycle-Centric Plan for Beverly Hills, as it should be. That’s why people are not aware of it,” White said.

Multiple speakers said they use street parking not just for themselves, but also for their caregivers, housekeepers and other employees. Former Mayor Robert Tanenbaum also forcefully decried the plan and unsuccessfully attempted to pressure Susan Healy Keene, the city’s community development director, into promising that no street parking would be removed from residential neighborhoods. Keene said discussions on bike lanes and residential parking will continue as the Complete Streets Plan moves forward.

“We care about maintaining the residential integrity of our streets. That matters to us. That’s why we moved into houses where we selected them,” Tanenbaum said.

The commission members, however, pushed back against the critics, especially those who alleged that city staff was looking to make unpopular changes without sufficient public input. Commissioner David Seidel said of the online feedback the city has received, 90% of the 70 emails were supportive of the Complete Streets Plan, as were all 22 online comments posted on the website.

“This plan allows the city to move forward. It’s a progressive plan, but it’s not a dictatorial plan … This paves the way and opens the door for all the things that can come in the future,” Seidel said.

The commissioners also made clear that the process of deciding what is in the plan is not yet done, and changes are still likely to come. The commission will solicit more feedback from the public in January and will then make a recommendation to the City Council. The council will have to ultimately approve the plan.

“We need to move together to find a plan that works for everyone,” Commissioner Sharon Ignarro said.

How many of the ‘90% of the 70 emails’ are residents of Beverly Hills?
I heard a commissioner comment that emails can come from anyone…
Not just residents. The city is unable to decipher whether or not these emails come from residents who will absolutely be impacted by the changes this proposal reflects.
Of course bicycles, using our city as a thoroughfare, want this to pass.
I have heard them speak before the city council. Their agenda is less cars and more bicycles and scooters.
There are many of we residents who would like our city to maintain the integrity it deserves…without the traffic mess other cities have created.
Do we hire more resources to enforce the laws of bikers, scooters and cars?

Having lived here almost 20 years I have spoken to MANY residents and I tell you honestly this proposal is wildly unpopular by any objective criteria.
For once please be responsive to the wishes of your constituents.