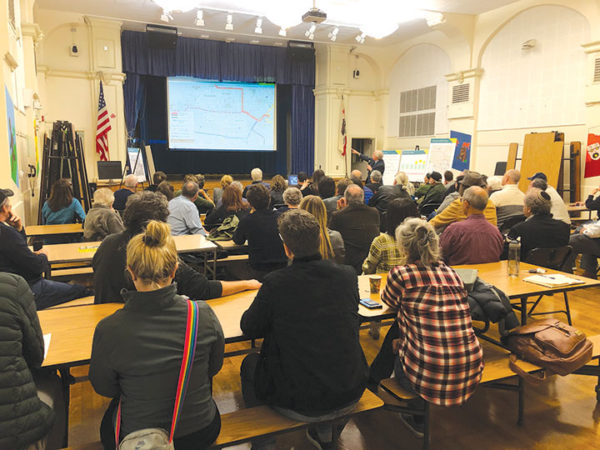 Attendees gathered at Carthay School of Environmental Studies Magnet to view a Metro presentation on the Crenshaw Northern Extension and have a public discussion. (photo by Morgan Keith)

Approximately 60 people gathered on Dec. 11 at Carthay School of Environmental Studies Magnet for a neighborhood meeting with Metro about the Crenshaw Northern Extension.

Metro is considering options for the extension’s route, which would connect to the Crenshaw/LAX line and provide service between southern and central portions of Los Angeles. Although location studies are already underway, groundbreaking for the alignment would not begin until 2041 and service would start in 2047, said David Mieger, Metro’s senior executive officer of long range transportation planning and mobility corridors. However, efforts to accelerate the project’s timeline are underway.

“A lot of people, including folks from L.A. and the city of West Hollywood said, ‘We want to see the studies done now because we want to know where the line is going to be when you actually go to build it, and we want to be ready in the event that new funding becomes available,’” Mieger said.

In November 2018, the West Hollywood City Council authorized financial firms HR&A and Scully Capital to study how the city could raise additional funds to accelerate the opening of the extension by almost 20 years. West Hollywood Mayor Pro Tempore Lindsey Horvath attended the meeting.

Many of the other attendees, most of whom were Carthay Circle residents, opposed one of the line’s proposed locations, San Vicente Boulevard, for a multitude of reasons including upzoning, or changing zoning to allow for higher-value or more dense uses.

“My biggest concern is that mass transit is a Trojan horse to redesign this area,” said Jonathan Bennett, who has lived in Carthay Circle for 60 years.

Brent Kidwell, president of the Carthay Circle Neighborhood Association, echoed concerns about upzoning if San Vicente Boulevard was selected for the extension.

“One of the few remaining historic neighborhoods is potentially in jeopardy of being totally destroyed by this train,” Kidwell said. “The upzoning law would allow developers to raise homes and build ‘McMansions’ or developments.”

Neighborhood resident and urban planner Mónica Carlos Tellalian, who helped organize the meeting, opposed the San Vicente option because it would bisect the Carthay Circle historic preservation overlay zone and its proximity to her daughters’ school, to which they walk daily.

“There’s a lot of pedestrian challenges already, so I can’t imagine a train becoming part of the equation,” Carlos Tellalian said.

Many residents at the meeting mentioned that an above-ground train may not be possible on San Vicente because of the backup it would cause at intersections of Fairfax Avenue and Olympic Boulevard and San Vicente and Wilshire boulevards.

Other potential options that are being considered to establish the extension between Exposition/Crenshaw and Hollywood/Highland are La Cienega Boulevard and Fairfax Avenue. La Brea Avenue is also still being studied.

A San Vicente/Fairfax hybrid route was added to the study after suggestions to combine the best of the two lines were made during public comment at previous meetings. If the hybrid is chosen, 49% of the line would exist in West Hollywood and 51% in the city of Los Angeles, according to HR&A’s findings.

Several residents said during public comment that the hybrid option would be their top choice for the Crenshaw Northern Extension.

Metro will consider which options to authorize for environmental impact reports at a February 2020 board meeting. Mieger said that the board of directors will potentially narrow its options down to two alignments for the next stage of studies.