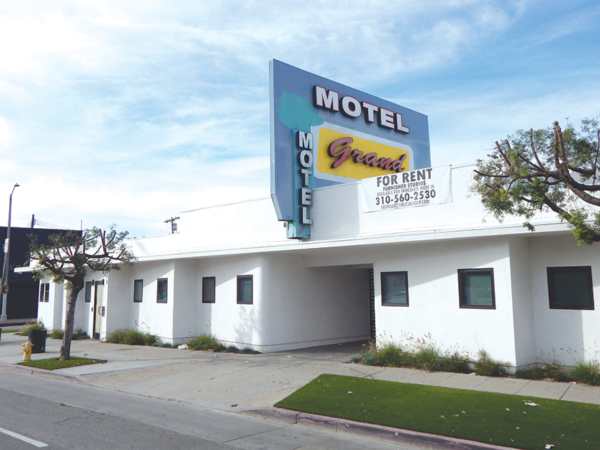 The city is considering a former motel on La Cienega Boulevard as a potential site for bridge housing. (photo by Edwin Folven)

Los Angeles City Councilmen in the 4th, 5th and 13th districts are moving ahead with plans for new bridge housing to get people off the streets quickly and help alleviate the homelessness crisis.

On Dec. 11, Councilman Mitch O’Farrell, 13th District, announced that 60 additional beds have been approved at a YWCA bridge housing site in Hollywood. The shelter at Lodi Place and Lexington Avenue has been in operation since October 2018 and previously offered 64 beds for women. The 60 additional beds will include 30 for youth ages 18 to 24, with the remainder designated for adult women.

“These beds, along with wraparound supportive services, are going a long way toward giving those experiencing homelessness what they need to thrive instead of struggling on the margins,” O’Farrell said. “There is always more work to do, and I am committed to continuing my push for a state match of our $1.2 billion in HHH investment, building permanent supportive housing on city-owned parcels such as one on Glendale Boulevard in Echo Park, and establishing safe parking sites and mobile pit stop locations throughout the district.”

“I am thrilled that the YWCA will be able to reach more women and youth, and provide critical housing and supportive services so they can be contributing members of society,” added Faye Washington, president and CEO of YWCA Greater Los Angeles. “This project represents the true essence of our mission, the empowerment of women and the elimination of racism. I’m proud to do our part and collaborate with Councilmember O’Farrell and the city to address this crisis.”

A Bridge Home projects in the 13th District are complemented by shelters in the 4th District represented by Councilman David Ryu. In September, a temporary shelter opened in Hollywood at the former Will and Ariel Durant Branch Library building on Gardner Street, south of Sunset Boulevard. The 30-bed facility for women also offers job training and counseling aimed at helping residents become reintegrated into society.

“Homelessness is a crisis, and it demands a crisis-level response,” Ryu said. “A Bridge Home program, which provides housing and mental health care faster and cheaper than traditional housing, is crucial to that response. I support this great program led by Mayor Eric Garcetti. We need to be opening these lifesaving centers wherever people continue to suffer on the streets.”

In the 5th District, Councilman Paul Koretz is attempting to find places where A Bridge Home housing can be created and is also seeking to identify city-owned parking lots where shelters or temporary housing can be added. Previous attempts at securing sites for shelters have fallen through after the properties were bought by developers before the city could act, Koretz spokeswoman Alison Simard said.

The site of a former motel in the 1400 block of South La Cienega Boulevard is under consideration for a prospective A Bridge Home shelter in the 5th District. The former motel was once a haven for crime, Koretz said. It was closed in 2016 after the Los Angeles City Attorney’s office filed legal action because of alleged prostitution and drug sales. The building has since been renovated and remains vacant. A motion to begin exploring the feasibility of purchasing or leasing the La Cienega Boulevard site was considered by the City Council on Dec. 11, and Koretz is hopeful a shelter there will come to fruition.

“I am excited about this one,” Koretz added. “Ironically, this is one of the first sites we looked at quite a while ago when the A Bridge Home project was announced, but it didn’t come through,” Koretz said. “I think it would be a real positive in many ways. It would be quite an improvement over what was there.”

Brewery and restaurant on tap at Firestone building on La Brea