Brewery and restaurant on tap at Firestone building on La Brea 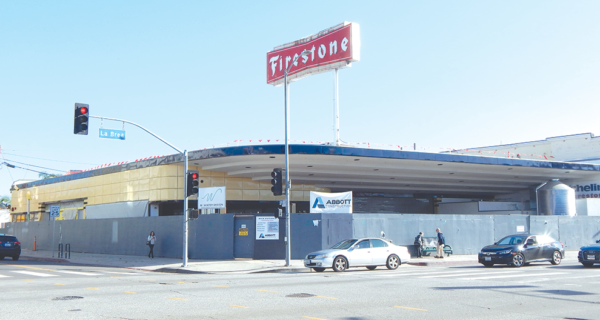 The former Firestone automotive center is being repurposed into a brewery and restaurant. (photo by Edwin Folven)

The former Firestone service center at the corner of La Brea Avenue and Eighth Street will soon have new life with the opening of All Season Brewing Co., a craft brewery and restaurant by the Pouring with Heart hospitality group.

Plans call for the brewery and restaurant at 800 S. La Brea Ave. to open in late January. Crews have recently been working at the site, and a large brewery tank can be seen behind a fence around the building.

All Season Brewing Co. will offer 20 beers on tap, as well as wine and cocktails in a 13,000-square-foot indoor and outdoor space. It will have a 15-barrel brewhouse helmed by brewmaster Devon Randall.

The All Season Brewing Co. name pays tribute to warm Southern California weather and the Firestone brand’s all-season tires, according to the statement provided. The site was formerly a tire and auto repair shop.

The building was designated as a city of Los Angeles historic-cultural monument in 2012 because it is considered an example of Streamline Moderne auto-related architecture. The Firestone automotive center closed in 2015. The building façade and signage is being preserved.

Representatives of the neighborhood said they are optimistic about the new brewery and restaurant.

“We supported it,” said Conrad Starr, president of the Sycamore Square Neighborhood Association. “Pouring with Heart and Conroy Commercial were very receptive to our concerns as far as being good custodians for the quality of life in the neighborhood. There is overwhelming enthusiasm for the plans and people are really excited for it.”

“The next chapter for the historic Firestone building has been long awaited,” added Los Angeles City Councilman David Ryu, 4th District. “By maintaining the Streamline Moderne architecture and opening it to the public as a place to eat and drink, I hope that even more people will come to enjoy and value this building as a neighborhood landmark.”

Starr said a brewery at the site would complement the retail experience at Eighth Street and La Brea Avenue, where Commerson restaurant, Met Her At A Bar café and Little Bar are located on the other corners. Met Her At A Bar Pasta is currently under construction at the southwest corner.

“I am happy to see that intersection between Sycamore Square and the Miracle Mile taking form,” Starr added. “We are really happy or them to be there, offering something new for our neighborhood and those coming from a little farther away.”