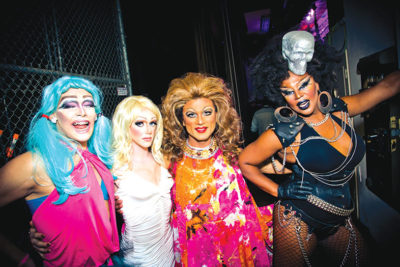 For many people, the best New Year’s Eve party in West Hollywood is free of both alcohol and a price tag.

#BOOM!, which is sponsored by the city of West Hollywood, Los Angeles LGBT Center, Institute for Public Strategies, West Hollywood Project and APLA Health, offers a night of no-cost fun in a drug- and alcohol-free environment at the West Hollywood Park Auditorium, located at 647 N. San Vicente Blvd. Parking in the nearby garage will also be free with validation.

Now in its seventh year, #BOOM! does for New Year’s Eve what #SIZZLE! does for Pride, offering a fun party that is free of alcohol and drugs during a holiday that is known as a time to indulge, said Jimmy Palmieri, a West Hollywood Human Services Commissioner and co-founder of #BOOM!

The party, however, isn’t just for those in recovery, and Palmieri said he expects more than 1,100 people to come through over the course of the night. Some of them may already be under the influence, and they won’t be turned away as long as they do not use drugs or drink at the party, Palmieri said. Without the drinking and drugs, many of the negative aspects of partying, such as fighting, are absent, leaving a party that has grown over the years, Palmieri said.

Alexis Sanchez, assistant program manager for the nonprofit West Hollywood Project, said people often eschew bars or other parties so that they can spend more time at #BOOM!

“We want to give people a fun event. I have friends who aren’t in recovery, and they say they’ll drop by for just a little bit, and then they’ll stay for the whole night because it’s a really good time and a really great party,” Sanchez said.

Along with food and drink, music and dancing, #BOOM! features a costume ball. This year’s theme is icons, and attendees can expect to see guests’ take on Beyoncé, Marilyn Monroe and Ruth Bader Ginsburg and strut their stuff on the catwalk. It’s not a contest, though participants will receive a token gift.

“There are lots of really good costumes, and people really go all out. I know it’s going to be a great time,” Mayor Pro Tempore Lindsey Horvath said.

#BOOM! is so popular that the auditorium sometimes reaches capacity, so those who show up later in the evening might have to wait to enter. Palmieri said wait times can be minimized if people register for their free ticket online before the event, though everyone eventually gets in.

Mayor John D’Amico said #BOOM! is part of a “regular New Year’s Eve” for him and his husband, Keith Rand.

“All of that overindulging is the alternative for me. Being clear-eyed and sober and facing the new year with those things in place is really how I like to live my life,” Mayor John D’Amico said.

Councilman John Duran said #BOOM! is an ideal place for anyone who wishes to avoid the partying atmosphere that can be found elsewhere in West Hollywood.

“All of West Hollywood is going to be fun on New Year’s Eve, from the Sunset Strip to Historic Boys Town … but if anyone is looking for an alcohol- and drug-free zone, this is the place to be,” Duran said.