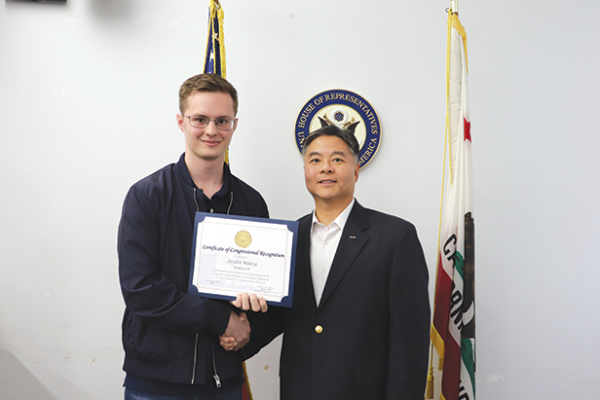 Bulexa, 15, came in second of 24 entrants in Lieu’s contest with his iPhone application StudentID, which uses machine learning and facial recognition software to allow users to scan someone’s face and compare them to a database of saved faces. If there’s a positive match, the application tells the user information about the person.

“You would point the app at someone’s face, and it would scan them and say their name, their student ID and what grade they’re in,” Bulexa said.

Bulexa said he came up with the idea after a transient was found on school grounds in April. With Bulexa’s application, security guards would have known quickly that the intruder was not a student and did not belong on campus.

In an email, Lieu, who majored in computer science at Stanford University, said encouraging teens and young people to work with technology creates “a new generation of problem solvers that can grow up to use their talents for good.”

“Like our panel of judges this year, I was incredibly impressed by the diversity of apps submitted because they demonstrate these students’ commitment to addressing challenges small and large,” Lieu said. “For example, Jayden saw an opportunity to innovate around his school’s student ID system and created the StudentID app. These impressive examples of creativity demonstrate the importance of STEM education.”

Bulexa said it was the third time he’s come in second place in Lieu’s contest, as he also developed an application for calculating one’s grades in school and an app, similar to StudentID, which can identify cat breeds based on pictures. He has also put his coding skills to use in a cybersecurity contest put on by the Air Force Association’s CyberPatriot program, where he’s advanced as far as the semifinal round.

The Beverly Hills resident said he has been coding for years.

“I liked playing around with computers when I was little, and I wanted to make a game and such when I was young. I started learning how to code, and I realized I could use it to solve problems,” Bulexa said.

Given the success he’s had, Bulexa said he wants to pursue computer science in college, potentially at Carnegie Mellon University, which he said has a “really good cybersecurity team.”

“I feel great about [the Congressional App Challenge]. It showed the impact you can have with machine learning. Most apps are related to machine learning and facial recognition, and I think it shows I have a future,” Bulexa said.

Bulexa also said he’d like to see StudentID put to use in schools, as well as other places that require an ID to enter, such as military bases. However, it’s not quite ready yet, and Bulexa said he wants to “make sure it’s perfect before it’s used.”