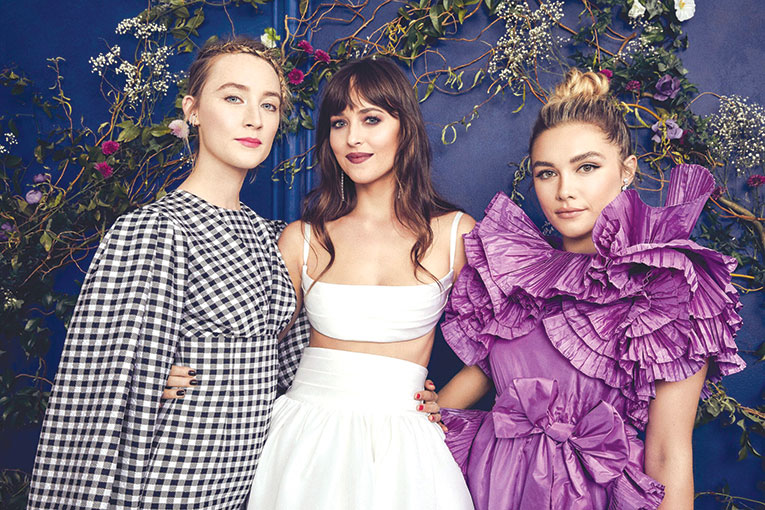 “Little Women” actresses Saoirse Ronan, left, and Florence Pugh, right, pose with Dakota Johnson. The film has been nominated in the Score and Makeup and Hairstyling categories. (photo courtesy of the Academy of Motion Picture Arts and Sciences)

Fifteen of the 159 film submissions will advance in the Documentary Feature category including “Advocate,” “American Factory,” “The Apollo,” “Apollo 11,” “Aquarela,” “The Biggest Little Farm,” “The Cave,” “The Edge of Democracy,” “For Sama,” “The Great Hack,” “Honeyland,” “Knock Down the House,” “Maiden,” “Midnight Family” and “One Child Nation.”

Ten films will also advance in the Makeup and Hairstyling category. All members of the Academy’s Makeup Artists and Hairstylists Branch will be invited to view seven-minute excerpts from each of the 10 shortlisted films on Saturday, Jan. 4. Members will vote to nominate five films for final Oscar consideration. The films are “Bombshell,” “Dolemite Is My Name,” “Downton Abbey,” “Joker,” “Judy,” “Little Women,” “Maleficent: Mistress of Evil,” “1917,” “Once Upon a Time… in Hollywood” and “Rocketman.”

Fifteen of the 75 eligible songs will advance in the Original Song category including “Speechless” from “Aladdin,” “Letter To My Godfather” from “The Black Godfather,” “I’m Standing With You” from “Breakthrough,” “Da Bronx” from “The Bronx USA,” “Into The Unknown” from “Frozen II,” “Stand Up” from “Harriet,” “Catchy Song” from “The Lego Movie 2: The Second Part,” “Never Too Late” from “The Lion King,” “Spirit” from “The Lion King,” “Daily Battles” from “Motherless Brooklyn,” “A Glass of Soju” from “Parasite,” “(I’m Gonna) Love Me Again” from “Rocketman,” “High Above The Water” from “Toni Morrison: The Pieces I Am,” “I Can’t Let You Throw Yourself Away” from “Toy Story 4,” and “Glasgow” from “Wild Rose.”

The 92nd Oscars will be held on Sunday, Feb. 9 at the Dolby Theatre at the Hollywood & Highland Center and will be televised live on ABC.

‘Rock of Ages’ is a smash hit