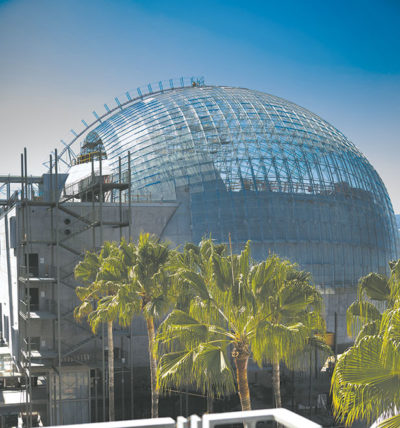 The transparent dome at the Academy Museum changed the skyline of the Miracle Mile. (photo by Andy Kitchen)

The past year has been a time of change and growth in the cities of Beverly Hills, West Hollywood and Los Angeles, with the momentum of progress evident in the changing physical landscape.

New development and infrastructure improvements continue, yet many neighborhoods are retaining their defining characteristics while embracing advancement. The social landscape is evolving as well with new approaches to addressing homelessness, public health and transportation. With the 2020 election fast approaching, people are looking ahead to what the coming year will bring.

In Beverly Hills, city government has provided leadership on many fronts, taking bold steps to ensure high quality of life and prosperity. In 2019, the city of Beverly Hills became the first in the nation to ban the sale of tobacco products. The city also spearheaded the fight against a state law (Senate Bill 50) that would have taken away local power over zoning and development along major transportation corridors. The Beverly Hills City Council expanded its BOLD programming, keeping businesses open later during summer and the holidays and offering more entertainment opportunities and attractions. The city also took the lead on housing and infrastructure improvement, requiring new developments to include affordable housing, and moving forward with plans to upgrade La Cienega Park.

In March, John Mirisch was appointed mayor of Beverly Hills and led a fight for more local control over civic matters. A target was SB 50, a bill authored by state Sen. Scott Wiener (D-San Francisco) intended to make it easier to build multi-family housing near major streets and transit centers.

The law threatened to take away city control over major parts of Beverly Hills, Mirisch contended, and he was vocal at city meetings about the threat it posed. The cities of Los Angeles and West Hollywood also opposed SB 50. The bill was suspended in the state Senate Appropriations committee earlier this year but remains in limbo and may soon return to the realm of public discourse.

Beverly Hills also made progress in considering a future with autonomous vehicles and held meetings on how the city can be part of the process to prepare. The city’s Fine Art Commission evolved into the Arts and Culture Commission, expanding its reach in advancing programs and events that promote the arts. Beverly Hills’ BOLD programming also returned in August with more entertainment, arts and attractions, bringing more people to Rodeo Drive and the business triangle while stores and restaurants remained open later into the night. BOLD’s winter programming returned in November, providing a welcoming holiday experience in Beverly Hills.

The Beverly Hills City Council made progress on health issues, approving an ordinance in June banning the sale of tobacco products. The ordinance will take effect on Jan. 1, 2021, with exceptions for the city’s three cigar lounges and hotels that sell the products to guests. In another move to make the city safer, the council continued a ban on shared mobility devices such as e-scooters, and came to agreements that provide for the continued capping of oil wells formerly operating at Beverly Hills High School.

The city also made headway on plans for La Cienega Park, where a redesign is under consideration that includes a new recreation building with indoor and outdoor tennis courts, new basketball courts, two pools, parking and a landscaped bridge spanning La Cienega Boulevard to connect sections of the park on opposite sides of the street. The city is continuing the pre-design process and the idea is to create a world-class facility to serve the city for years to come.

In the city of West Hollywood, progress was evident on many fronts, including the advancement of civil rights and providing social services to seniors, people with disabilities and debilitating diseases, and others lacking resources. Construction continues at West Hollywood Park, where a four-story Recreation and Aquatic Center is taking shape near the library and parking garage, and an AIDS Monument will pay homage to people who lost their lives to the disease.

The city also remains a center of the LGBTQ community, hosting the annual One City One Pride festival, which drew thousands. The city hosts more than a dozen events from May through June including educational and arts programming. The festival this year included concerts by top artists such as Paula Abdul, Meghan Trainor and Years & Years. LA Pride will mark a milestone in the coming year with its 50th anniversary.

West Hollywood held an election in 2019 in which incumbents won big. In March, Mayor Pro Tem Lindsey Horvath received the most votes with 24.4%, followed by Councilwoman Lauren Meister with 22.6% and Mayor John D’Amico with 15.3%.  Joined by fellow council members John Heilman and John Duran, the council has taken a lead in work to accelerate a light rail line through West Hollywood, and has worked to preserve landmarks like the French Market, the Rainbow, Roxy Theatre and Whisky a Go Go.

Public safety remains an important issue in West Hollywood, with more traffic calming measures and pedestrian enhancements created on Fountain Avenue and Santa Monica Boulevard. The council was also instrumental in protecting longtime tenants such as seniors and members of the Russian-speaking community from losing their homes when landlords decide to take properties off the market under the Ellis Act, and has one of the strongest rent-stabilization ordinances in the region, allowing evictions only for certain reasons such as not paying rent or causing a nuisance.

A story that generated headlines throughout the year in West Hollywood involved longtime resident and political donor Ed Buck, who was indicted on federal charges in early October for allegedly providing drugs to two men, Gemmel Moore and Timothy Dean, who died in his Laurel Avenue apartment of overdoses. Moore died in 2017 and Dean died in January, but authorities were initially unable to charge Buck because of insufficient evidence. After a third man overdosed in Buck’s apartment in September but survived and turned to authorities, Buck was arrested and charged with felonies including distributing methamphetamine resulting in death. He remains in custody pending court proceedings in the coming year. If convicted, Buck could face up to life in prison.

Los Angeles remained a center of change in 2019, with new buildings taking shape throughout Hollywood and the Purple Line Extension project continuing its push toward Century City and eventually West Los Angeles. Major future projects were approved including a 26-story tower that will be built at the site of Amoeba Records, and the $1 billion Crossroads Hollywood project, which will include three towers up to 32 stories with a hotel, housing, commercial and retail space on Sunset Boulevard just east of Highland Avenue. That project has drawn opposition by tenants rights groups and lawsuits are pending.

Construction continues on the Purple Line Extension, with twin boring machines completing tunneling between La Brea and Western avenues in 2019, and now tunneling from La Brea Avenue toward La Cienega Boulevard. Piling is under a moratorium currently in Beverly Hills for the holidays, but work is progressing at many other locations, including at the future subway stations at Wilshire/La Brea, Wilshire/Fairfax and Wilshire/La Cienega, as well as in Century City, the end of phase one of the project. The Purple Line is anticipated to be complete to the Westwood area before the 2028 Los Angeles Olympic Games.

Just as the subway is changing the landscape of the Miracle Mile, so are the cultural institutions that line Museum Row. The glass dome at the Academy Museum took shape during 2019, with the institution dedicated to the science and splendor of film anticipated to open next year.

The Los Angeles County Museum of Art also began its transformation in 2019, with three main buildings closing for a multi-year construction project that will result in a singular structure extending over Wilshire Boulevard and connecting to the south side. The project is anticipated to be complete in 2024 and will create more open space around the museum, as well as new innovative and naturally-illuminated spaces to view art. LACMA remains open during construction with exhibits and programing in the Broad Contemporary Art Museum, Resnick Pavilion and other spaces, as well as programs off-site at satellite locations such as the Charles White Elementary School in Koreatown.

LACMA’s neighbor, the La Brea Tar Pits and Museum, also made headlines in 2019 as it embarked on a re-envisioning process that will shape its future. Three firms were selected to present ideas, with New York-based Weiss/Manfredi recently announced as the winner. The firm’s proposal calls for a looping series of paths throughout the site and a new museum facility augmenting the existing building. Much to the delight of countless people who grew up visiting the site, the statues of a mammoth family at the edge of the lake pit along Wilshire Boulevard will remain. The Natural History Museum of Los Angeles County, which oversees the La Brea Tar Pits and Museum, will next move into a multi-year design phase that will include opportunities for the public to provide input and direction on the future of the tar pits.

Tom Bergin’s, an 83-year-old Irish pub at 840 S. Fairfax Ave., reopened last week. The Los Angeles Conservancy and Miracle Mile Residential Association fought to save the pub after it was announced it was being closed to make way for potential new development. The pub was designated a historic-cultural monument in 2019, however the adjacent parking lot will be developed for housing.

Los Angeles, and other cities throughout the region, continued to struggle with the homelessness crisis, however some progress occurred. In March, a temporary bridge-housing shelter opened in Councilman Mitch O’Farrell’s 13th District on a city parking lot on Shrader Avenue in Hollywood. The facility offers 70 beds where people can get off the streets while transitioning into permanent housing. In September, another bridge housing facility with 30 beds for women opened in a former library building on Gardner Street in Councilman David Ryu’s 4th District. The shelters are among others opening or planned throughout the area to reduce the homeless population. The Los Angeles Homeless Services Authority’s annual homeless count will be held again in January, and officials are hoping for better results than last year, when approximately 36,300 people were found to be experiencing homelessness citywide in Los Angeles, a 16% increase.

2020 could be a year of dynamic change, with elections in Los Angeles, Beverly Hills, the state and nation occurring. Local leaders will face challengers in the March primary election, including Ryu, in Los Angeles, and Council members Lili Bosse and Julian Gold in Beverly Hills. The California primary is a little more than three months away, and federal leaders for the local area including U.S. Reps. Adam Schiff, Ted Lieu and Karen Bass will appear on the ballot.