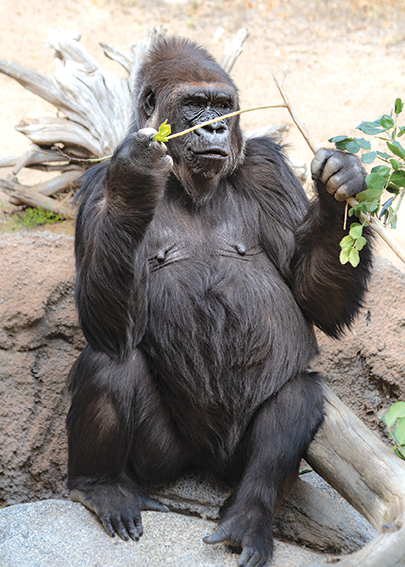 The Los Angeles Zoo’s western lowland gorilla N’djia is expecting a baby soon, marking the first time the L.A. Zoo has experienced such a birth in decades. (photo by Jamie Pham)

For the first time in over 20 years, the Los Angeles Zoo is making preparations for the highly anticipated birth of a critically endangered western lowland gorilla.

The 25-year-old first-time mother N’djia (pronounced en-JEE-uh) came to the L.A. Zoo in 2018 from the San Diego Zoo as part of a breeding recommendation from the Association of Zoos and Aquariums’ Species Survival Plan Program. After animal care staff observed N’djia breeding with the male silverback gorilla Kelly, they confirmed her pregnancy through a series of tests. N’djia is nearing the end of her 8.5-month gestation period, and the zoo is cautiously optimistic that a baby will join the rest of the troop sometime between now and January.

“We’re really excited to share the news of this pregnancy with the public,” said Beth Schaefer, director of animal programs at the Los Angeles Zoo. “The western lowland gorilla is critically endangered in the wild, so having an insurance population in zoos is extremely important. We welcome the public to follow us on this journey as we prepare for the birth of N’djia’s first baby. It really shows the amount of diligent work and planning that goes into caring for all of the animals here at the zoo from birth to death, and all of the big events in between.”

L.A. Zoo animal care and health staff confirmed N’djia’s pregnancy this past summer and began working together to monitor the health of both mom and baby. Staff immediately began training N’djia to participate in routine check-ups utilizing positive reinforcement. It is up to N’djia where and when she gives birth, but staff is trained and ready for any outcome. As with any birth, there are risks such as miscarriage, stillbirth, or various complications, but animal care and health staff are hopeful that N’djia’s first pregnancy will be a success.

“I’m optimistic N’djia will be a great mom,” said Candace Sclimenti, curator of mammals at the Los Angeles Zoo. “Although she’s a first-time mother, she’s lived in a group with babies before. While female gorillas carry the majority of responsibility for rearing their young, Kelly has fathered offspring and has proven to be a very patient, playful dad. As a team, we’re experiencing many firsts with this pregnancy. We’re excited to share everything we’re learning with the public because we want to create connections between our guests and wildlife.”

The new gorilla baby will help educate the public on a species that is currently considered critically endangered in the wild due to illegal hunting, susceptibility to diseases such as the Ebola virus and habitat degradation and destruction. Despite the fact that all killing, capture and consumption of great apes is illegal, hunting for bushmeat is the primary reason for the decline of western lowland gorillas.

Western lowland gorillas are native to the lowlands and swamp forests of Cameroon, Central African Republic, Equatorial Guinea, the Democratic Republic of the Congo, Gabon and Angola. Western lowland gorillas are considered peaceful animals, as they are social and live in stable, cohesive groups composed of one silverback adult male, several adult females and their offspring.

Guests can visit N’djia and Kelly, along with their companions Rapunzel and Evelyn, at the Campo Gorilla Reserve exhibit. The Los Angeles Zoo is located at 5333 Zoo Drive. For information, call (323)644-4200, or visit lazoo.org.