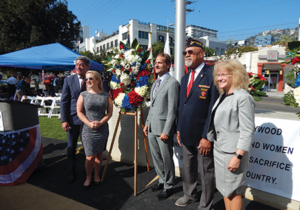 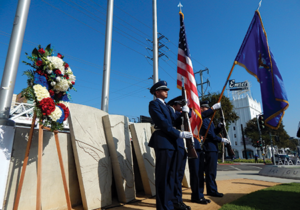 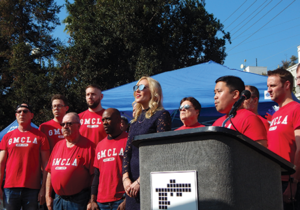 Following a moment of silence, the national anthem was performed by the Gay Men’s Chorus of Los Angeles and soloist Lindsay Solonycze. (photo by Morgan Keith) 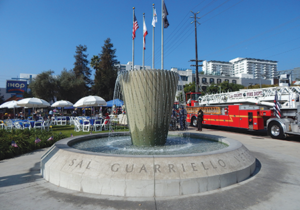 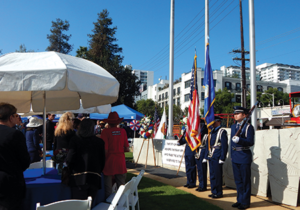 Andy Harland Jr., a veteran and event co-chair, led the attendees in reciting the Pledge of Allegiance after the presentation of colors by as UCLA’s ROTC Air Force Color Guard.

Approximately 100 people gathered at the Sal Guarriello Veterans’ Memorial in West Hollywood for a Veterans Day ceremony honoring both veterans and their families on Nov. 11.

Attendees — many donning medals, patches and hats — mingled under white umbrellas before the ceremony started. A presentation of colors and the pledge of allegiance started the event and were followed by a moment of silence and performances of “Taps” and the national anthem. After their conclusion, Mayor Pro Tempore Lindsey Horvath asked all veterans in attendance to stand and be recognized.

Councilwoman Lauren Meister emphasized how veterans’ sacrifices allow us to “agree or disagree without fear of harassment or oppression,” and protect the rights that shape our democracy.

Veteran Dave Culmer, who was awarded a Congressional Gold Medal by President Barack Obama in 2012, concluded the ceremony with a brief history of military desegregation and his experience as a black man serving in the Marines.

According to Culmer, the Department of Defense was trying to bulk up their forces with World War II on the horizon  and nationally declared in 1942, “African Americans can be accepted and can join the Marine Corps.”

However, “the ugly hand of racism,” as Culmer called it, still applied to government employment.

After enlisting in 1949, Culmer remembers the “stringent discipline” of his boot camp, Montford Point, and his black drill instructors’ aversion to failure.

Culmer said it was an “absolute requirement to get the job done,” to show white generals that black recruits could fulfill the requirements of Marines, “regardless of what it cost you.”

Veterans from the Los Angeles County fire and sheriff’s departments, as well as the Gay Men’s Chorus of Los Angeles, were distinguished by Councilman John Duran, whose father and uncles served in the Marine Corps.

“Different generations, different gender, different sexual orientation, different race, but the one thing that brings us all together is not pledging allegiance simply to the flag,” Duran said. “The flag is an emblem for a set of values, truths and virtues that have been placed here permanently for hundreds of years.”