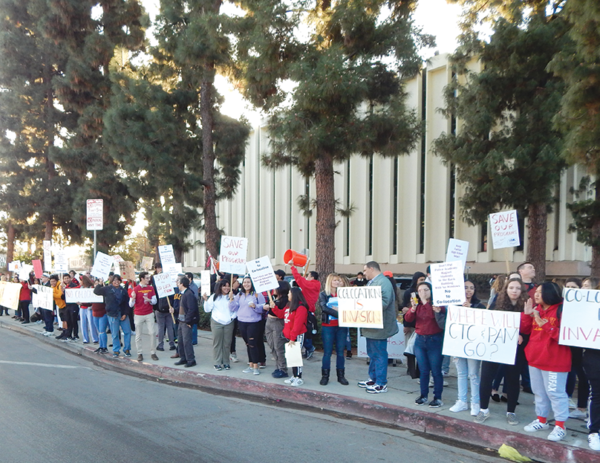 On Nov. 22, dozens of opponents rallied against a plan to put a new middle school on the Fairfax High School campus. (photo by Cameron Kiszla)

A planned vote on a potential new middle school for West Hollywood has been delayed until the new year.

A Nov. 25 email from Cheryl Hildreth, superintendent of the LAUSD’s Local District West, said LDW and Board District 4, represented by Nick Melvoin, have recommended the LAUSD Board of Education delay its planned vote on the West Hollywood-Fairfax Academy. Hildreth said the school district officials recommended the vote be postponed from its planned Dec. 3 date to a 2020 board meeting.

“This will allow us to finalize the details of this plan with more opportunities for community engagement and consideration of all stakeholders,” Hildreth said.

Hildreth added that the relocation of the Career and Transition Center program at Fairfax High School – which was expected to be moved to a new location in the LAUSD to make room for the new middle school – was one of the factors behind the decision, as the new location for the program for special-needs students has not been finalized.

“The vote delay will allow us to ensure that we are able to provide an equal or better location and facility to best serve these students, and further engage their families in this process,” Hildreth said.

Opponents of the WHFA said they think the protest outside Fairfax High School on the morning Nov. 22, as well as the meeting with Hildreth, Melvoin and other school and district officials that followed the protest, made moving forward untenable for the school district.

The protest was scheduled to immediately precede the planned meeting, and dozens of parents, as well as some teachers and students, filled a classroom at Fairfax High for the meeting.

In the Q&A portion of the meeting, many attendees, who said they were parents of LAUSD students, pointedly questioned the school district’s plans and intentions regarding the WHFA, as well as the communications and outreach that critics claim have often left them in the dark on recent developments. Despite several requests by school district officials for attendees to wait their turn to speak, critics loudly and passionately decried the process and the plan for the new middle school, which they said is displacing current LAUSD students, many of whom have special needs or are people of color, to attract more affluent and white students who often attend middle school elsewhere.

“Every year, we lose students, and … the reason that attendance is so important is because we fund schools based on attendance. So as we’ve lost attendance, we’ve lost resources,” Melvoin said.

In the meeting, parents critical of the process claimed that privileged and often white parents from the six elementary schools are working to create a public middle school that allows them greater control over enrollment and demographics.

Jordin Lang, an LAUSD parent who vocally challenged the new middle school idea in the town hall meeting, said she thinks the heated nature of the town hall played a big part in securing the delay.

“Those are optics that, no matter how unwavering you believe your political support to be, once you start being accused of blatant racism and classism in Los Angeles, that can be pretty politically damaging, even for school board members,” Lang said.

WHFA supporters, however, claim their intentions are simply to create a new middle school that offers a quality education in a convenient location for West Hollywood parents so that students from the six elementary schools can attend middle school together and not be split up. Hylan “Tee” Hubbard, a supporter of WHFA who is African American, is a parent of students at West Hollywood Elementary and Paul Revere Charter Middle School.

Hubbard wanted his fifth-grader to attend WHFA in the fall of 2020, its expected opening, and said he was “particularly frustrated” by the news that the vote was going to be delayed by what he described as opponents stopping progress “at the 11th hour.”

Some who pushed back against the plan to move the CTC and police magnet, however, said they’ve been kept out of the loop. Barbara Jefferson, a CTC teacher, said she learned about news of the potential changes to the programs on Fairfax’s campus through flyers she discovered by chance. Jefferson added that she learned about the vote delay in a screenshot sent to a group text, not from district officials themselves. Hildreth’s Nov. 25 email was sent to  parents and others who attended meetings and provided their email addresses to school district officials.

“I was pleased to hear that [school district officials] heard what the community had to say and seemed to respond, but my very next thought was, ‘why didn’t I get my own work email?’” Jefferson said.

Jefferson said she believes the Nov. 22 protest is the reason for the delay, as it showed the local community is standing up for the special needs students who might be impacted by the proposed middle school.

Hubbard said he and the fellow supporters don’t want the CTC and police magnet to be impacted in a way that hurts enrollment or forces the current students to “scatter,” though he said if moving the programs is the best option for the greatest number of people, he’s in support.