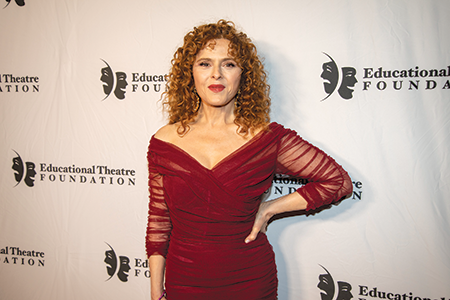 Bernadette Peters, who has starred in Broadway productions of “Gypsy,” “On the Town” and more, was honored at the Thespians Go Hollywood Gala on Nov. 18. (photo courtesy of Craig X Sotres)

Broadway legend Bernadette Peters was honored with the Craig Zadan Theatre for Life Award by the Educational Theatre Foundation at the annual Thespians Go Hollywood Gala held on Nov. 18, at The Avalon in Hollywood.

Over 300 people raised more than $180,000, which will support ETF’s national theater education programs for schools in need.

“Hairspray” producer Neil Meron presented Peters with her award, which recognizes an individual who has dedicated their life to promoting and preserving the joy of theater, inspiring young artists and leaving a lasting impact on generations to come.

“The only job that young people have is to stay open, open to your teachers and your inspiration,” Peters said. She thanked everyone with a rendition of one of her signature pieces, “Children Will Listen” from “Into the Woods.”

“At a time when education budgets are being cut with arts programs often the first to go, ETF is creating a lifeline for millions of young people to experience theater for the first time in schools, not only teaching them life skills of collaboration, hard work and creative expression, but also inspiring the next generation of theatergoers and artists on stage and behind the curtain.”

To culminate the evening, gala attendees were the first to learn of the launch of the ETF Initiative for Racial Equity in School Theatre. The initiative will work to increase access to school theater in communities facing racial disparity. Each year ETF’s Racial Equity Initiative will award grants to schools to produce a musical or play with the support of a professional production team of color who will be brought in to act as mentors to students.