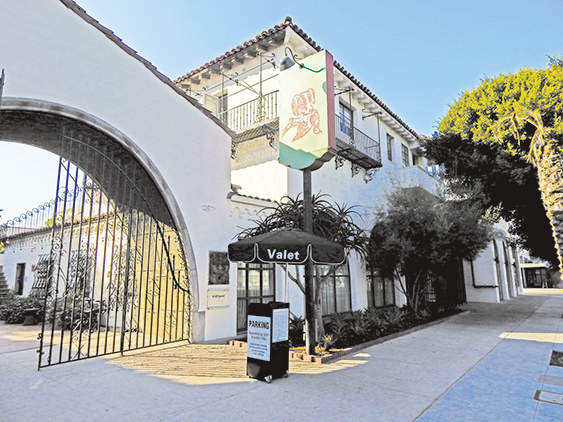 The Fred C. Thomson Building has been home to many restaurants, including “The Hearth & Hound,” which closed last January, and previously “Moana Loa,” “Sunset Gardens,” “The Cat & Fiddle” and others. (photo by Morgan Keith)

The commissioned house of American silent film cowboy Fred C. Thomson was designated as a historic-cultural monument by the Los Angeles City Council at their Nov. 4 meeting.

Thomson passed away from tetanus at the age of 38 just a year after the property was commissioned. According to the HCM application, the Thomson Corporation sold it to a traveling salesman named Franklin Rice after his death, whose executor sold the building to ventriloquist Edgar Bergen after Rice passed.

Bergen started broadcasting “The Charlie McCarthy Show” for CBS, showcasing the first of his wooden characters in a room he’d converted into a radio studio in the building.

On June 20, the commission voted to take the property under consideration for HCM status after an application was prepared by historian Charles Fisher and submitted on behalf of the AIDS Healthcare Foundation.

“This building has an incredible Hollywood pedigree,” said Miki Jackson, Healthy Housing Foundation advisor for AHF. “People don’t remember him because he died young, but he was as big as Tom Mix and other stars from that era.”

Designed by architects Henry L. Gogerty and Carl Jules Weyl, the Fred C. Thomson Building has been occupied and repurposed by a multitude of industry members, from ventriloquists to restauranteurs, since its construction.

The distinct Spanish Colonial Revival style used by Gogerty and Weyl helped the house meet one of three qualifications that can qualify properties for HCM status. In their initial report, the Cultural Heritage Commission found that the building’s “smooth stucco wall cladding, multi-lite wood casement windows and hipped red-tiled roof are all reflective of the style.”

Additionally, the property’s connection to a historic person helped it meet a second qualification.

Commissioners Diane Kanner and Barry Milofsky were sent with staff from the Office of Historic Resources to visit the house and its history-filled rooms on July 11, according to commission documents.

Over the next two months, the commission concluded the house fit the definition of an HCM, got approval from the Planning and Land Use Management Committee and sent their recommendations to City Council for final approval on its inclusion.

The council voted unanimously to incorporate the Fred C. Thomson Building into the city’s list of HCMs.

“I am pleased that The Fred C. Thomson building is now a historic-cultural monument in the City of Los Angeles,” said Councilmember Mitch O’Farrell, 13th district, where the building resides. “The Thomson Building, once home to the iconic ‘The Cat & Fiddle’ restaurant on Sunset Boulevard, is a welcome addition to Hollywood’s historic cultural monument list.”