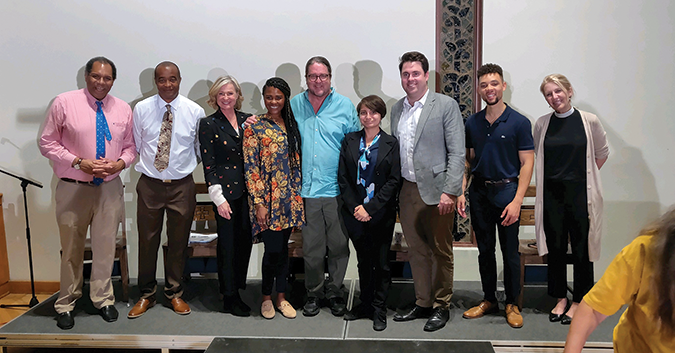 Nearly 100 people gathered at St. James’ Episcopal Church on Monday, Nov. 18, to listen to speakers cover a variety of topics surrounding homelessness, with some sharing their personal experiences.

The event was hosted by Stories from the Frontline, an organization seeking to end homelessness through supportive housing, local outreach and volunteering.

“I think that when people hear these stories, the power of a personal story is just invaluable,” said Frontline co-founder Marilyn Wells, whose children previously attended St. James’ Episcopal School.

“I think it’s so important that we ensure children of all ages understand that while we have a beautiful world, it’s a complicated world,” said Peter Reinke, headmaster of St. James’ Episcopal School. “These are discussions that we can’t be just kicking down the road until they’re in college or out in the world.”

Curriculum for Civil Society Day was tailored to different age groups, with the youngest grades learning about the issue through Sanchez’s “Scruffy and the Egg,” a picture book about family homelessness and single parenthood.

Sanchez was one of several speakers who shared their personal experience with homelessness with the audience.

She and her father lost their home in November 2007 when she was 16. In the two years that passed before they secured housing under Section 8, Sanchez said the one thing that felt normal in her life was going to school.

Ashley Samuels, teacher and director of community service at St. James’, noted that Sanchez’ story is not uncommon. “Seventeen thousand students in LAUSD schools are homeless as we speak,” Samuels said.

Because of this number, LAUSD students are likely to interact with someone in their classroom who is experiencing homelessness, said Sanchez, who completed her bachelor’s and master’s degrees at UCLA and now serves on the board of directors for School on Wheels.

To demonstrate more of the statistics surrounding homelessness in Los Angeles, a snapshot of the types of housing created in the city over the last few years was presented alongside the average annual income of residents.

The vast majority of new housing was only affordable for people who make above the average annual income in Los Angeles County, or $61,000, according to presenter Tommy Newman.

“Our housing crisis is driving this homelessness crisis,” said Newman, who is the senior director of impact initiatives at the United Way of Greater Los Angeles.

The night’s speakers concurred that a major solution to the problem is building more supportive housing, which has shown to be successful in helping tenants long term by providing things like mental health and addiction treatment on site.

“There is not one type of homelessness and there’s not one set of solutions,” Newman said.