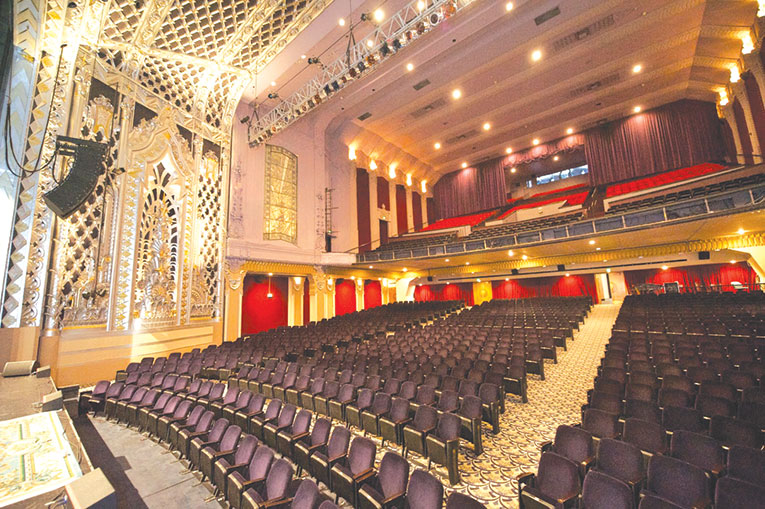 The Saban Theatre in Beverly Hills offers an ornate and intimate setting for the Distinguished Speakers Series. (photo courtesy of the Saban Theatre)

Magic Johnson, Colin Powell, Shimon Peres, Elie Wiesel, Condoleeza Rice, Yo-Yo Ma, Michael Phelps, David Cameron, Bill Nye, Joe Biden, Steve Martin – these are just a few of the impressive people who have spoken to the L.A. community as part of the Distinguished Speakers Series. Since 1996, Kathy Winterhalder and her sister, Sue Swan, have brought some of the world’s most renowned politicians, artists, athletes, scholars and activists to speak as part of their well-known series, which takes place at community theaters across the Southland and – most recently – Beverly Hills.

Winterhalder and Swan established the Distinguished Speaker Series to bring an enlightening, community-based educational experience to residents. The series is presented in five locations around the Los Angeles area, including the Ambassador Auditorium in Pasadena, Redondo Beach Performing Arts Center and for the past five years, the Saban Theatre in Beverly Hills. This season features impressive figures such as Anderson Cooper, who will speak on Jan. 26, and George W. Bush, who will speak on April 29.

The inspiration for the series came over 20 years ago after Winterhalder and Swan began attending the Peninsula Speaker Series started by their family friend, Bruce Vogel, in the Bay Area. The series was a conversation topic for the sisters when they went home to visit their parents, who attended the series regularly.

At the time, Swan was a Hollywood casting director and Winterhalder, who was newly married with twins, had just left her job as the director of alumni and development at California State University, Dominguez Hills. According to Winterhalder, it was the perfect time to embark on a new venture. Her parents had just sold their business, Swan was between movies and Winterhalder had two six-month old twins and was thinking of leaving behind the office life.

During a family gathering, they had the idea to bring a similar speaker series to L.A. With the family’s enthusiasm as motivation, the sisters wasted no time bringing their vision to life.

“We really couldn’t have done it if the whole family hadn’t come together to support the idea,” Winterhalder said. It began as a family operation and a self-funded venture.

Winterhalder’s father handled the accounting, and the sisters used their professional skills to produce the program. Swan, due to her time as a casting director in LA, had ample experience talking to agents and negotiating contracts, skills which helped in sourcing potential speakers and working with the speakers bureau. Winterhalder’s university fundraising experience brought the marketing and promotional skills needed to successfully advertise and sell the series.

Vogel gave them the idea to launch in Pasadena, mentoring them through the process and helping them work through certain hurdles.

“We thought the Los Angeles community would be just as receptive to the series as the Bay Area community, but we found promotion to be much more challenging,” Winterhalder said.

At the time, simply putting an ad in the L.A. Times Calendar section was extremely expensive, and promotion for the new series proved difficult.

“Even the idea of speakers as a form of entertainment was new,” Winterhalder said.

Their first year was full of trial and error, as well as challenges in gaining traction with the series. For the first season, they tried to get a former Israeli prime minister, but were met with an unexpected hurdle when the speakers bureau pulled him on concerns the event could not fill an auditorium.

“Like any business, it takes a while to make a profit and get something up and running,” Winterhalder said. “That year for us was do or die.”

Winterhalder said they were lucky to experience “divine intervention” during their first year. A representative of the Pasadena theater called to let them know another speaker was requesting the room on a night the Distinguished Speakers Series had already reserved. Instead of giving up the night or refusing the other speaker, the parties agreed to join their programs.

That speaker was the Dalai Lama. The season sold out, and the series made enough money to turn a profit, continue operations and expand into more locations like Thousand Oaks and Redondo Beach.

Even in their early years they hosted well-known figures such as former First Lady Barbara Bush and James Lovell, command module pilot of Apollo 8 and one of the first three astronauts to go to the moon. Throughout the years, they’ve added to their Rolodex of impressive speakers.

“We always strive to bring a variety of conversation topics and people from different backgrounds,” Winterhalder said.

The speakers are selected through a member survey of 400 names and topics, where audience members are asked to select their top 20 choices. They consolidate the surveys to come up with the top 20%, which represent the most requested speakers and conversation topics for the next series.

“The nice thing is that we get to spend time with and meet these incredibly interesting people,” Winterhalder said.

She entertains friends with humorous tales and interesting predicaments she has encountered over the years, including the time she dined with Tibetan monks at a monastery in Hacienda Heights before hosting the Dalai Lama.

Former Secretary of State Colin Powell’s limo got a flat tire on the 101 Freeway while he was on his way to speak at the series in Thousand Oaks. It was getting close to the time of the event, and while his driver was on the phone with AAA, Powell rolled up his sleeves and changed the tire himself on the side of the freeway.

Powell called Winterhalder and told her he was on his way, asking to have a burger and a scotch on the rocks waiting for him backstage. When he got to the theater, covered in tire grease, he told the story of how’d he’d almost missed the event. A few weeks later, they received a humorous letter from him that included his dry cleaning bill.

Another interesting story involves the late Benazir Bhutto, the former Prime Minister of Pakistan and the first woman to lead a democratic government in a Muslim-majority country, who was assassinated in 2007. At the time of Bhutto’s appearance in the Speaker Series in 2003, her husband, former Pakistani President Asif Zardari, had been arrested following the dismissal of Bhutto’s government and was in jail awaiting trial. After her talk, Bhutto pulled Winterhalder aside and asked her – given her connections through the series – if she could get in touch with the Bush administration to help her husband.

“I thought, ‘I’m a PTA mom, I don’t know if I can help,’” Winterhalder recalled. However, in 2004, when George Bush’s advisor Karen Hughes came to speak at the series, Winterhalder approached her after the show and brought up Zardari’s arrest. Whether or not Winterhalder’s action had any influence, a few months later, Zardari was released.

The speaker series is sold as packages for the season, rather than per event. This feature has allowed them to attract bigger names and average the cost per speaker, Winterhalder said. The Distinguished Speaker Series subscription packages at the Saban Theater range from $280 for a series of four speakers to $300 for the remaining five speakers.

According to Winterhalder, groups have tried to replicate the Distinguished Speakers Series, but competition has grown tougher given the reputation and scope the series has gained. Instead of reaching out to agents themselves, they will often get calls directly from agents asking if they are interested in presenting their clients, such as Jane Fonda and Lily Tomlin, who spoke in October at the Saban.

Winterhalder said the figures want to speak and share their stories with communities. Winterhalder and Swan always ask speakers if they know others who might be interested. And of course, they have a wish list, which includes people like Bill Gates, Steven Spielberg and former First Lady Michelle Obama.

“It’s not an audience of like-minded people,” Winterhalder said. “Our audiences are open-minded. They might not watch the same cable news channel as the person sitting next to them, but they enjoy coming together with their neighbors to learn, have fun and share ideas.”

“For us, it’s more than entertainment,” Winterhalder added. “We believe we play an important role in bringing these communities together.”